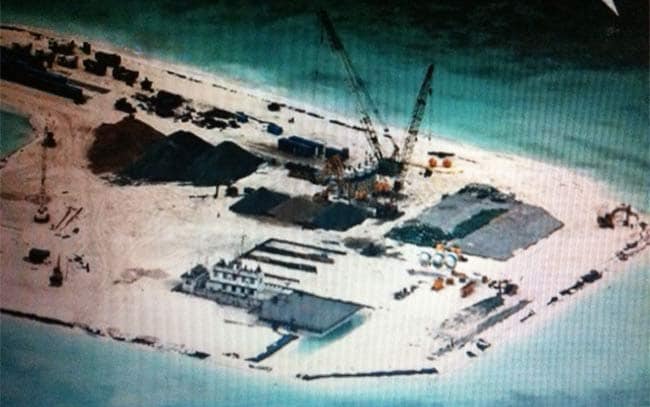 The Philippines government has released a latest picture of reclamation work being done by China on one of the disputed Kennan [Chigua] reefs in the South China Sea.

Obtained from intelligence sources in the government, the picture shows huge cranes, construction raw material, tin containers to be used as shelter for people and a cemented portion that the Philippines government believes to be an air strip.

"From the size, we can surmise, it's a military base," said Charles C. Jose, additional secretary and the spokesperson of the department of foreign affairs in the Philippines government told NDTV.

Chinese construction work is being carried out not just on Kennan reef, but also on Mabini, Calderon and Gaven reefs. Reclamation work is on in full swing as the Philippines registered a diplomatic protest and accused China of violating a 2002 agreement between parties on the dispute, that stated that no country shall further inhabit any unoccupied area.

China has been asking for bilateral resolution to the several claims on South China Sea. But smaller ASEAN nations like the Philippines and Vietnam feel vulnerable in front of a dominating China. The Asian giant on one hand seeks dialogue and on the other continues strengthening its claims by continuing construction on the disputed reefs.

"The Chinese say one thing and do another," said Mr Jose.

It is precisely for these reasons that the Philippines has opted for international arbitration in the matter and has asked for the dispute to be resolved through United Nations Convention on the Law of the Seas (UNCLOS).

Promoted
Listen to the latest songs, only on JioSaavn.com
Mr Jose complimented India for showing the way by recently resolving their maritime dispute with Bangladesh through UNCLOS.

"It was hailed all over. It shows how neighbouring nations can resolve such disputes amicably," said Mr Jose.
Comments
Chinaconstructionsouth China sea