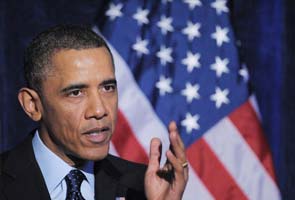 Mr Obama congratulated Mr Xi on his new appointment after he was named president by China's parliament and said US-China relations faced an historic opportunity for future cooperation, the Xinhua news agency said.

"He emphasised that as long as the two sides follow the spirit of mutual respect, openness and tolerance, China and the United States will be able to achieve more in the Asia-Pacific region and to turn the Pacific into an ocean of peace and cooperation."

Mr Obama on Wednesday had stepped up rhetoric on the issue of hacking, saying cyber threats affecting US firms and infrastructure were increasing, with some being "state sponsored".

"I can confirm that the president spoke with President Xi today and he congratulated President Xi on his new positions," White House spokesman Jay Carney said.

Asked whether Mr Obama discussed cyber-security, Carney said that US officials, at all levels, constantly bring up issues of greatest contention between Washington and Beijing.