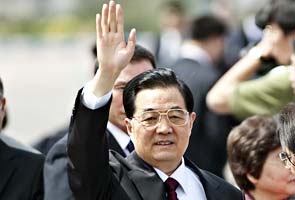 Beijing: Outgoing Chinese president Hu Jintao is keeping the nation and the rest of the world guessing over whether he will seek to hang on as armed forces chief, sources said, highlighting a potentially serious weakness in Beijing's succession planning.

The question of when Hu will hand over the reins as chairman of the Central Military Commission, the supreme decision-making body for the armed forces, is one of the biggest uncertainties surrounding China's current transition to a new administration.

Hu currently heads the Communist Party, the government and the military and is due to hand over all three positions to Xi, his current vice president, though not at the same time. He hands over the party job this month, the presidency next March and there is no clear timing for when the military post changes hands.

With the new political leadership just days away from being officially unveiled at a party congress, this underlines how the process of handing over all the instruments of power is still evolving in China, which has nuclear arms and boasts a 2.3 million-strong military.

Currently the world's second-biggest economy, it has managed a bloodless leadership transition only once before -- when Jiang Zemin handed power to Hu in the early 2000's.

Even sources with ties to the leadership and military are divided over whether, or for how long, Hu will linger as their boss, though they said that top generals had asked him recently to stay on at least until early 2013.

"The PLA wants Hu to stay on to ensure continuity during this difficult period," one source said, requesting anonymity to avoid repercussions for discussing sensitive leadership issues.

The top brass made the request to Hu a few months ago, hopeful perhaps that his continued leadership of the armed forces would help preserve their own influence during a tricky transition period, the sources said.

Hu has three options for handing over the military job: pass it to Xi this month along with the party post, relinquish it early next year along with the presidency, or follow the example of Jiang, who kept the military post for two years after stepping down as president.

Jiang's move caused internal rancour at the time, and China experts say the prospect of Hu doing something similar would have the potential to raise tensions again, pointing out that Xi, the new leader, would end up serving beneath Hu on the Central Military Commission for a prolonged period.

In addition, Hu would preside over the military commission without being part of the party's Politburo Standing Committee, the apex of power in China.

Cheng Li, a senior fellow at the Brookings Institution in Washington, believes Hu and Xi would rub along in this scenario, given they have worked together closely for five y e ars already, and that Beijing's consensus-style politics is designed to avoid destabilising personal conflicts or power plays.

But uncertainty over this aspect of leadership succession reveals a governance problem which has potential to cause friction, depending on the personalities involved, he said.

"Potentially it could be a very serious problem," Cheng said, adding that Beijing should make its decision-making more transparent, and drawing a contrast with Western democracies where "we know who is the boss and decision-maker".

"Now of course China should improve its decision-making mechanism, and at least define who should do what, and who has autonomy, the power, the authority to make the decision, but at the same time to define the limitations (of power)."

With no clearly established pattern for when to hand over the role of armed forces chief in China, a debate has sprung up within the party and the military over whether Hu should stay on for a while in the interests of continuity or should go in the interests of a clean transition to the new leader, Xi.

As for Hu himself, sources have said he wants to avoid repeating Jiang's unpopular move, but a problem arises if he gives up the military post at the same time as he steps down as party chief. He is due to relinquish the latter post at the party's 18th congress, which convenes on Thursday.

The problem springs from the fact that there are in theory two identical and parallel versions of the Central Military Commission - one to be chosen by the party this month and the other by parliament next March. In effect, the party's choice is simply rubber-stamped by parliament, but with a lag.

That means that even if Hu surrenders the military post at the congress, he would technically remain head of the commission in the eyes of parliament and the executive branch of government for another four months - and the military would briefly have two chiefs: Xi as chosen by the party, and Hu as the government's lame-duck version.

The sources said Hu could instead choose to remain as commission chairman until February, when the party's elite 200-odd-member Central Committee is due to meet just days before parliament assembles for its full annual session in March.

Under that scenario, the Central Committee could install Xi as the new chairman of the Central Military Commission (CMC), with parliament then quickly rubber-stamping it.

"If this happens, Hu's legacy will be institutionalising the term of office of party and state CMC and harmonising this and future transitions," the second source said.

This scenario would also suit other incumbent members of the military commission who - with the exception of Hu and Xi - are mostly senior military leaders and are due to be replaced at this month's congress, the sources said.

With Hu staying on - even if only for another four months - these outgoing members, who have served with Hu for years on the commission, could continue to have the ear of their armed forces chief for a crucial period in which the new administration would be expected to review its priorities.

"The incumbent CMC will step down at the 18th congress but they (outgoing members) hope to retain influence if Hu stays on," a third source said.

With Hu's intentions unknown, it is still possible he could decide to stay on for a few more years, as Jiang did.

Former Hong Kong chief executive Tung Chee-hwa told CNN in September that based on past practice Hu would most likely remain as military chief "for some time". He did not elaborate and stressed that he was not privy to such information.

Those among the top brass who would lose influence with Hu's departure can see plenty of reasons for him to continue.

Hu has generally toed a moderate military line on issues such as Taiwan and territorial disputes in the South China Sea and East China Sea, but he has also overseen an ambitious military build-up, including the launch of China's first aircraft carrier and the development of stealth fighters.

The jockeying among senior military ranks is well underway, with Xu Qiliang, who stepped down last month as air force commander, and Fan Changlong, currently commander of Nanjing Military Region, announced at the weekend as the two non-civilian vice chairmen of the military commission.

In August, three sources with ties to the top leadership said Hu hoped to leave all three major posts by early 2013, on the understanding that his protege, Vice Premier Li Keqiang, was also made a vice chairman of the military commission.

Xi's own position, according to the sources, is that he is content for Hu to stay on - though experts say this would only extend until March, the end of the formal transition period.

Some China experts believe this could free up Xi for a few critical months to focus on shaping his political agenda.

"The advantage of that is that it would give Xi Jinping greater time to focus on domestic changes," said David Zweig, a of the Hong Kong University of Science and Technology.

"Clearly, China feels pressed from the outside. It would not be a bad strategy," he added. "But if I were Xi, I wouldn't want him around more than a year. He wants to run China."
© Thomson Reuters 2012
Comments
Hu Jintao