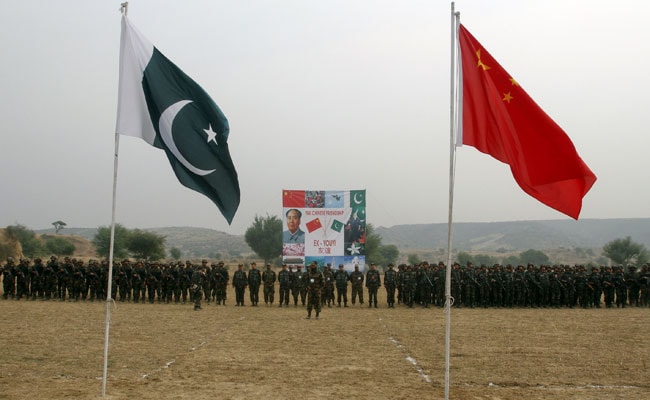 China has increased its bilateral and multilateral engagement with foreign militaries, including Pakistan

The US Department of Defence in its annual report to Congress on ''Military and Security Developments involving the People's Republic of China 2020'' has stated that Pakistan is among the countries, which have been chosen by the Beijing for "military logistics facilities".

According to the Defence Department's report published last week, the PRC is seeking to establish a robust overseas logistics and basing infrastructure to allow the PLA to project and sustain military power at greater distances.

The Department further stated that China's One Belt, One Road (OBOR) projects in Pakistan dealing with pipelines and port construction intend to decrease Beijing's reliance on transporting energy resources through strategic chokepoints, such as the Strait of Malacca.

"In support of its national strategy, the PRC pursues a range of goals through OBOR to include strengthening its territorial integrity, increasing its energy security and expanding its international influence. Given the Party views the PRC's security and development interests as complementary, the PRC leverages OBOR to invest in projects along China's western and southern periphery to improve stability and diminish threats along its borders. Similarly, OBOR projects associated with pipelines and port construction in Pakistan intend to decrease China's reliance on transporting energy resources through strategic chokepoints, such as the Strait of Malacca," the department said.

Further, China has increased its bilateral and multilateral engagement with foreign militaries, including Russia, Pakistan, and the Association of Southeast Asian Nations (ASEAN) as it will improve the PLA's ability to organise and manage combined operations that integrate foreign forces.

"The PRC uses multilateral forums and international organizations to generate new opportunities to expand its influence, strengthen its political influence, promotes strategic messaging that portrays it as a responsible global actor, advance its development interests and limit outside interference in and criticism of its initiatives," the report said.

"Towards these ends, the PRC has embraced multilateral organizations such as Brazil, Russia, India, China and South Africa, the Shanghai Cooperation Organization, the African Union, the Association of Southeast Asian Nations, as well as forums and initiatives such as the Forum on China-Africa Cooperation, the China-Arab States Cooperation Forum, the "17+1" initiative between China and 17 Central and Eastern European countries, and the Belt and Road Forum," the report read.