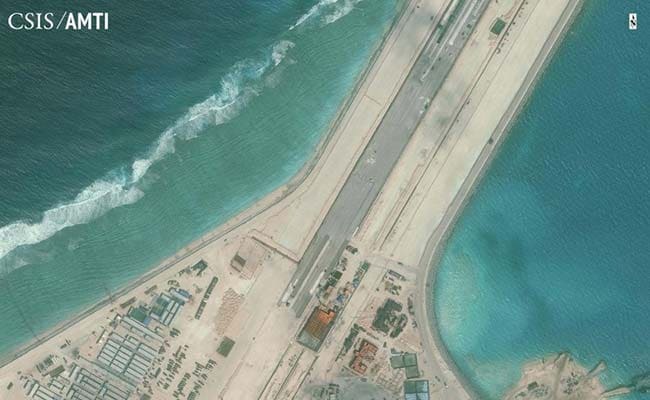 US cautioned that the verdict on South China Sea should be treated as final and binding.

WASHINGTON: China risks violating international law if it continues to strike a defiant tone and ignores an arbitration court ruling that denies its claims in the South China Sea despite calls from the United States and the head of the United Nations for the peaceful resolution of disputes in the oil-rich waters.

In a case that was seen as a test of China's rising power and its economic and strategic rivalry with the United States, the Permanent Court of Arbitration in The Hague ruled on Tuesday that China had breached the Philippines' sovereign rights by endangering Philippine ships and fishing and oil projects.

China's ambassador to the United States, Cui Tiankai, said at an international forum in Washington on Tuesday that the arbitration case "will probably open the door of abusing arbitration procedures.

"It will certainly undermine and weaken the motivation of states to engage in negotiations and consultations for solving their disputes," Cui said. "It will certainly intensify conflict and even confrontation."Cui also said, however that Beijing remains committed to negotiations with other parties in the South China Sea issue.

The United States, which China has accused of fuelling tensions and militarising the region with patrols and exercises, said the ruling should be treated as final and binding.

"We certainly would urge all parties not to use this as an opportunity to engage in escalatory or provocative action," White House spokesman Josh Earnest told reporters in a briefing.

The ruling is significant as it is the first time that a legal challenge has been brought in the dispute, which covers some of the world's most promising oil and gas fields and fishing areas.

US State Department spokesman John Kirby said Washington has seen signs in recent weeks of continued militarization by China in the South China Sea. President Barack Obama's top Asia policy adviser, Daniel Kritenbrink, said the United States had no interest in stirring tensions in the South China Sea as a pretext for involvement in the region.

"We have an enduring interest in seeing territorial and maritime disputes in the Asia Pacific, including in the South China Sea, resolved peacefully, without coercion and in a manner that is consistent with international law," Kritenbrink said at a forum of the Center for Strategic and International Studies.

China boycotted the arbitration hearings and described them as a farce. China's Foreign Ministry rejected the ruling, saying its people had more than 2,000 years of history in the South China Sea, that its islands did have exclusive economic zones and that it had announced to the world its "dotted line" map in 1948.

"China's territorial sovereignty and maritime rights and interests in the South China Sea shall under no circumstances be affected by those awards," it said.

International law experts and China observers described the ruling as a legal blow to its claims in the disputed waters.

The ruling and China's defiance of it have brought China, the United States, Southeast Asia and the concept of an international order based on accepted rules of behaviour to a dangerous crossroads, with one path leading to negotiations but the more likely one toward growing tensions in a politically and economically vital area, administration officials and outside experts said on Tuesday.

"This is a tactical victory for the Philippines and a strategic defeat for international law," said Chas Freeman, a former US diplomat who was then-President Richard Nixon's interpreter on his historic trip to China in 1972. "This decision has left the issue in the condition where it can only be resolved by the use of force. There is no diplomatic process underway to settle claims, and now there's no longer a legal process."

Julia Guifang Xue, a professor of international law at Shanghai Jiao Tong University said that given Beijing's sensitivity about sovereignty and security "we won't be surprised to see some kind of renewed effort by China to consolidate its claim in the area."

US officials have previously said they feared China may respond to the ruling by declaring an air defence identification zone in the South China Sea, as it did in the East China Sea in 2013, or by stepping up its building and fortification of artificial islands.

China claims most of the energy-rich waters through which about $5 trillion in ship-borne trade passes every year. Brunei, Malaysia, the Philippines, Taiwan and Vietnam also have claims.

Finding for the Philippines on a number of issues, the court said there was no legal basis for China to claim historic rights to resources within its so-called nine-dash line, which covers almost 90 percent of the South China Sea.

None of China's reefs and holdings in the Spratly Islands entitled it to a 200-mile exclusive economic zone, it added.

United Nations Secretary-General Ban Ki-moon called on all parties to resolve the disputes in a "peaceful and amicable manner through dialogue and in conformity with international law."

The judges acknowledged China's refusal to participate, but said they sought to take account of China's position from its statements and diplomatic correspondence.

Taiwan, which maintains that the island it occupies, Itu Aba, is legally the only island among hundreds of reefs, shoals and atolls scattered across the seas, said it did not accept the ruling, which seriously impaired Taiwan's territorial rights in the 3.5 million sq km sea.

A US official who helps set the administration's Asia policies said that faced with the prospect of continuing Chinese assertiveness, it is important for countries in the region and for the United States to avoid provocative actions and leave the door open for Beijing to pursue peaceful solutions "and avoid making matters worse."

He also said, however, that the United States must honour its defence commitments in the Pacific and reassure the Philippines, Vietnam and China's other neighbours that it would not abandon them or Obama's pledge to devote more resources to Asian security.The Philippines said it was studying the ruling.

"We call on all those concerned to exercise restraint and sobriety," Foreign Affairs Secretary Perfecto Yasay told a news conference.

The court has no power of enforcement, but a victory for the Philippines could spur Taiwan, Vietnam, Malaysia and Brunei to file similar cases.