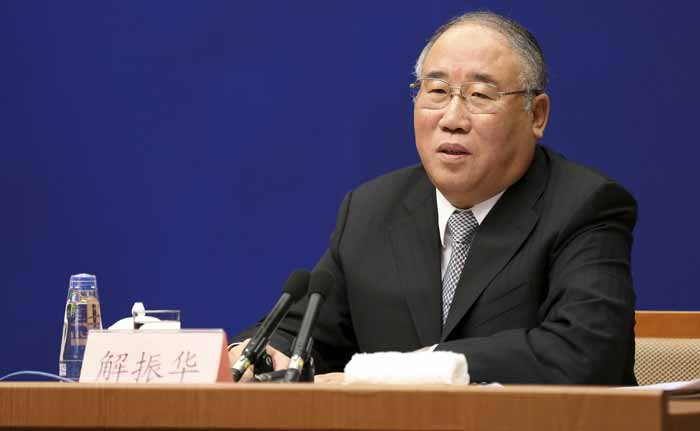 Beijing: Keeping state leaders away from the negotiations will play a major role in ensuring that crucial talks on a new global climate deal in Paris next week proceed smoothly, China's top climate change negotiator said in an interview today.

Representatives from nearly 200 countries will gather in the French capital to begin talks aimed at thrashing out a new global deal to cut climate-warming greenhouse gases.

Xie Zhenhua, China's veteran climate chief, told Reuters in an interview that he was confident there was now sufficient "political will" to secure a new deal, and that changes to the "design" of the talks would help avoid the failures of Copenhagen in 2009.

"No country wants the situation in Copenhagen to be repeated," he said. "Letting heads of state try to resolve the problems rather than leaving it to the negotiators was an error in the design and it led to an error in the result."

Despite months of anticipation and the direct involvement of senior state leaders, including President Barack Obama, the 2009 negotiations in the Danish capital did not result in any binding climate deal and were branded a failure.

Xie said China proposed to the secretariat of the United Nations Framework Convention on Climate Change at an early stage to try to restrict the involvement of state leaders in order to ease the political pressures on negotiators.

"They can speak at the opening ceremony, express hope about how the meeting should go, and make requests to their delegations, but afterwards, the specifics need to be resolved by the delegations," he said.

More than 160 countries have already submitted their own national pledges, known as INDCs, to the United Nations ahead of the Paris talks. While green groups have complained that the pledges would not be enough to meet the target of keeping global temperature rises within 2 degrees Celsius, Xie said he was not worried.

"The world still has time to meet that two-degree target," he said, adding, "The key issue will be in funding and technology."

China continued to push for "technological innovation, cooperation and transfer" to be granted a prominent role in any new climate deal, and industrialised countries still also needed to meet their responsibilities when it came to provision of funding, he said.

China has constantly pushed rich nations to meet their commitments to mobilise $100 billion of financing per year to help poorer countries mitigate and adapt to rising temperatures, and the issue remained a fundamental part of the upcoming negotiations, Xie said.

He said while there were still differences that needed to be resolved, there was a broad agreement on overall principles.

"Looking at the progress of the negotiations right now, there are still a lot of differences, but overall, I believe there is hope."

"From Bali to Paris, I have participated in nine years of climate negotiations and I have quite a lot of confidence in the Paris talks this year," he said. "No country has expressed opposition to the common principles. Everyone is in favour."
© Thomson Reuters 2015