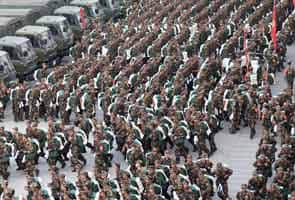 Beijing: China has become the world's fifth-largest arms exporter, a respected Sweden-based think tank said on Monday, its highest ranking since the Cold War, with Pakistan the main recipient.

China's volume of weapons exports between 2008 and 2012 rose 162 percent compared to the previous five year period, with its share of the global arms trade rising from 2 percent to 5 percent, the Stockholm International Peace Research Institute (SIPRI) said.

China replaces Britain in the top five arms-dealing countries between 2008 and 2012, a group dominated by the United States and Russia, which accounted for 30 percent and 26 percent of weapons exports, SIPRI said.

"China is establishing itself as a significant arms supplier to a growing number of important recipient states," Paul Holtom, director of the SIPRI Arms Transfers Programme, said in a statement.

Now the world's second-largest economy, China's rise has come with a new sense of military assertiveness with a growing budget to develop modern warfare equipment including aircraft carriers and drones.

At the Zhuhai air show in southern China in November, Chinese attack helicopters, missiles, unmanned aerial vehicles and air defences were on public show for the first time.

SIPRI maintains a global arms transfers database base that tracks arms exports back to the 1950s. It averages data over five-year periods because arms sales vary by year.

"Pakistan - which accounted for 55 percent of Chinese arms exports - is likely to remain the largest recipient of Chinese arms in the coming years due to large outstanding and planned orders for combat aircraft, submarines and frigates," SIPRI said.

Myanmar, which has been undergoing fragile reforms that the United States thinks could help counter Beijing's influence in the region, received 8 percent of China's weapons exports.

Bangladesh received 7 percent of the arms, and Algeria, Venezuela and Morocco have bought Chinese-made frigates, aircraft or armoured vehicles in the past several years.

Beijing does not release official figures for arms sales.

Germany and France ranked third and fourth on the arms exporter list. China followed only India in the acquisition of arms, though its reliance on imports is decreasing as it ramps up weapons production capabilities at home.

After decades of steep increases in military spending and cash injections into domestic defence contractors, experts say some Chinese-made equipment is now comparable to Russian or Western counterparts, though accurate information about the performance of Chinese weapons is scarce.

Promoted
Listen to the latest songs, only on JioSaavn.com
China faces bans on Western military imports, dating back to anger over its crushing of pro-democracy protests in and around Tiananmen Square in 1989. That makes its domestic arms industry crucial in assembling a modern military force that can enforce claims over Taiwan and disputed maritime territories.

China has faced off recently with its Southeast Asian neighbours and Japan over conflicting claims to strings of islets in the South China Sea and East China Sea, even as the United States executes a military pivot towards the Pacific.
© Thomson Reuters 2013
Comments
China arms exporter