An order in Hami town of China says actions ranging from being in contact with overseas "terror" groups to conservative Islamic behaviour should prompt individuals to turn themselves in. 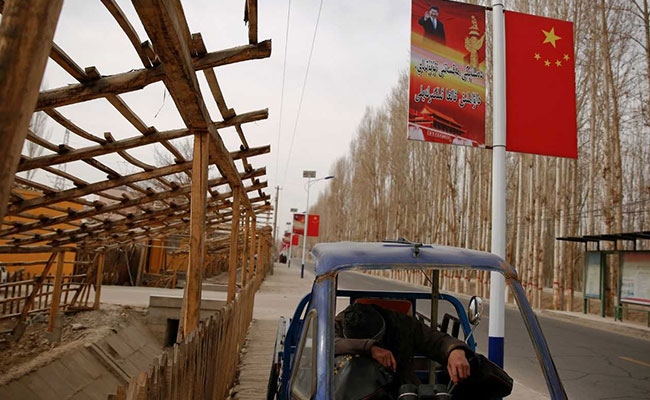 A city in China's far-western Xinjiang region has ordered people who are "poisoned by extremism, terrorism and separatism", in contact with overseas terror groups or act in a conservative Islamic manner, to turn themselves in to authorities.

Those who surrender to judicial organs within 30 days and confess to their crimes will be treated leniently and might avoid punishment, said a notice posted on Sunday on the official social media account of the Hami city government.

Beijing has in recent months faced an outcry from activists, academics and foreign governments over mass detentions and strict surveillance of the Muslim Uighur minority and other ethnic groups that live in Xinjiang.

China rejects the criticism, saying that it protects the religion and culture of minorities in the region and that its security measures are needed to combat the influence of "extremist" groups that incite violence there.

"All individuals involved in terrorist crimes and poisoned by the 'three evil forces' are urged to surrender themselves to the judicial organs within 30 days and to confess and hand over the facts of your crime," said the Hami city notice.

The notice issued by the municipal "leading small group for stability maintenance" says that actions ranging from being in contact with overseas "terror" groups to conservative Islamic behaviour should prompt individuals to turn themselves in.

Advocating that people live their entire lives in accordance with the Koran, stopping other people from watching television, or banning alcohol, smoking and dancing at weddings are listed as behaviours that should warrant informing the authorities.

The list also included openly destroying, rejecting or thwarting the government identification system, as well as rejecting government provided housing, subsidies and cigarettes or booze as being "haram" or forbidden.

Those who turn themselves in on time will be treated leniently, and if the information provides a significant clue, then they might avoid all punishment, the notice said.

In August, a United Nations human rights panel said it had received many credible reports that a million or more Uighurs and other minorities are being held in what resembles a "massive internment camp that is shrouded in secrecy" in Xinjiang.

China says it is not enforcing arbitrary detention and political re-education.

Aside from the mass detentions, rights groups also say that the Chinese government has significantly raised limitations on everyday religious observances in the region.

Last month, the region's capital Urumqi launched a campaign targeting halal products, like food and toothpaste, which are produced according to Islamic law, in order to prevent what it sees as the incursion of Islam into secular life.

(Except for the headline, this story has not been edited by NDTV staff and is published from a syndicated feed.)
Comments
Uighur ethnic minorityXinjiangExtremism In China