President Xi Jinping oversaw a memorial service with columns of black-clad mourners wearing a white flower on their jackets, braving freezing temperatures at a monument featuring statues of victims in the eastern city. 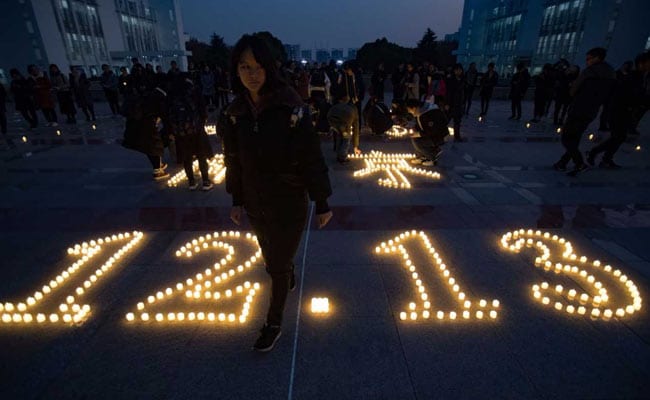 According to China some 300,000 civilians and soldiers were killed in the massacre (AFP)

Nanjing, China: China on Wednesday marked the 80th anniversary of the Nanjing massacre by Japanese troops, an enduring source of bad blood as present-day rivalry between the two countries keeps a spotlight on historical animosities.

President Xi Jinping oversaw a memorial service with columns of black-clad mourners wearing a white flower on their jackets, braving freezing temperatures at a monument featuring statues of victims in the eastern city.

Sirens blared at the start of the ceremony, while a giant "peace bell" tolled as doves were released into the air.

According to China some 300,000 civilians and soldiers were killed in a frenzy of murder, torture, rape, arson and looting in the six weeks after the invading Japanese military entered Nanjing, then the capital city, on December 13, 1937.

It remains one of the most fraught anniversaries for the two powerful neighbours due to stubborn disputes over the toll and periodic denials by Japanese arch-conservatives that the episode even took place.

Many in China say this symbolises Japan's unwillingness to completely atone for its wartime aggression.

Officially, Japan concedes that "the killing of a large number of noncombatants, looting and other acts occurred" but says it is "difficult" to determine precise figures.

The issue receded during the Cold War but has re-emerged as China strikes an increasingly muscular stance under Xi, while critics say Japanese revisionists have grown bolder under conservative leader Shinzo Abe.

China in 2014 formally made the anniversary a National Day of Remembrance, effectively raising its profile.

Liang Yunxiang, an international relations expert at Peking University, said Beijing wants to keep such memories alive as leverage against Japan in modern-day disputes such as maritime territorial squabbles.

"There are current conflicts between the two countries, so historical issues are re-emerging. All history is contemporary," Liang said.

"Japan thinks these historical issues should have ended but China keeps hammering them as it becomes more powerful."

Commemorations centred on the sombre and poignant memorial hall and museum in Nanjing, with soldiers carrying a large wreath at the site as Xi stood sombrely.

Beijing has said little about the anniversary, but a Chinese group this week reiterated its annual demand for Japan to compensate relatives of victims.

Fewer than 100 people designated as massacre "survivors" remain alive, however, and both sides have repeatedly expressed a desire to look forward and avoiding rocking their huge trade relationship.

But the spectre of Japanese aggression refuses to completely fade away.

Abe, the grandson of a wartime minister, has been accused of trying to gloss over history.

In 2015, he expressed "deep remorse" for Japan's actions in Asia, but also said future Japanese generations need not continually apologise, drawing criticism in China and South Korea, another wartime victim.

China's Nanjing toll is disputed even by some western academics who put it as low as the tens of thousands, but no respected historians dispute that a massacre occurred.

In 2014, Xi marked the first National Remembrance Day with a speech in Nanjing saying the slaughter and its "300,000 deceased victims" could not be denied.

China suffered immense loss of life, reserving special anger over a sense that Japan, unlike Germany, has never properly atoned.

Relations plunged in 2005 as China was swept by rare anti-Japan protests denouncing its war conduct.

Promoted
Listen to the latest songs, only on JioSaavn.com
But analysts say China's stability-obsessed leaders are deeply fearful of letting such passions re-emerge and potentially spiral out of control.