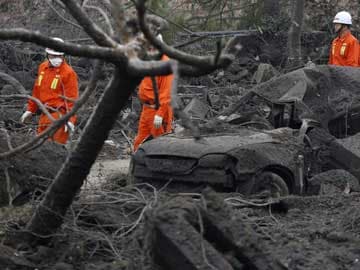 Rescuers walk past a wrecked car on a damaged road covered with debris a day after an explosion at a Sinopec Corp oil pipeline in Huangdao, Qingdao, Shandong Province November 23, 2013.

Shanghai: China has launched a broad investigation into safety at oil and gas pipelines, state media reported on Monday, as the death toll from an explosion at a Sinopec pipeline last week rose to 52.

The blast at the eastern oil hub of Qingdao on Friday was China Petroleum & Chemical Corp's (Sinopec) deadliest known accident and is one of the worst publicly reported industrial disasters in China this year.

State media reported the toll rose from 35 to 52 on Sunday after President Xi Jinping visited the city to examine rescue efforts and meet victims.

In an announcement to the Shanghai stock exchange on Monday, Sinopec said it was cooperating with a government investigation into the accident. It said operations were normal and oil supply was stable.

The official Xinhua News Service reported that Xi had ordered sweeping safety checks on the oil and gas pipeline network.

"A large-scale work safety check should be launched ... with inspectors going deep into the production sites anonymously and unannounced," the report quoted Xi as saying.

Xi said those responsible for the accident would be dealt with according to the law and victims' families would be compensated.

The explosion, caused when crude oil leaking from the pipeline ignited in storm drains, left a gaping crater in a major street, the official China Daily reported Monday.

Many of the dead were workers who were trying to repair the leak, according to local media reports, which published photographs of upended trucks and cars smashed by flying slabs of cement.

The explosion has stirred anger in Qingdao as the leak was discovered almost 8 hours before the blast yet residents were not warned of the danger, the China Daily report said.

Promoted
Listen to the latest songs, only on JioSaavn.com
The explosion comes as authorities scrutinise possible corruption at China's leading oil companies. Former head of China National Petroleum Company, Jiang Jiemin, and other senior officials at Petrochina were placed under investigation in September.

Sinopec Chairman Fu Chengyu apologised to the people of Qingdao during a visit to the scene, the company's Weibo microblog said on Saturday.
© Thomson Reuters 2013