China Hunkers Down As Delta Reaches Nearly Half The Country

The World Health Organization called for a moratorium on booster shots to enable poorer countries to catch up in vaccination rates, while the U.K. eased quarantine rules. 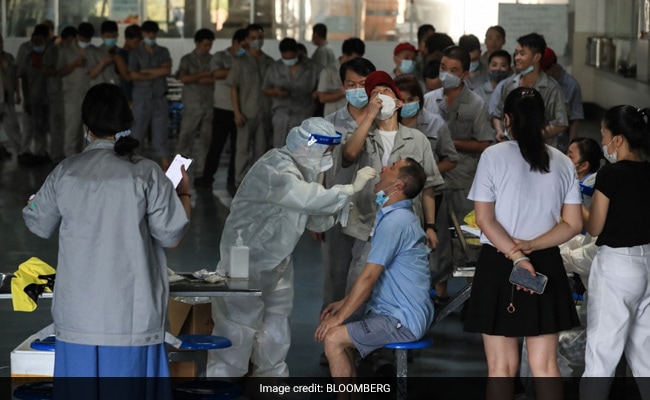 China imposed new travel restrictions across the nation as a delta-driven outbreak grew to over 500 cases across 15 provinces, adding to the global case count that has now topped 200 million.

The World Health Organization called for a moratorium on booster shots to enable poorer countries to catch up in vaccination rates, while the U.K. eased quarantine rules. Thailand set a daily record of almost 21,000 new cases and infections at the Tokyo Olympics hit a new high.

The Japanese government plans to extend a quasi state of emergency to eight more prefectures as the nation struggles to control outbreaks, public broadcaster NHK reported. Also in Japan, Isetan Mitsukoshi found 88 cases of coronavirus among vendors in the past week at its flagship department store in Tokyo.

Singapore's Covid-19 task force will be providing an "update on the Covid-19 situation soon," according to a Facebook post from Finance Minister Lawrence Wong, a co-leader of the group.

Singapore's vaccination rate has soared to among the best in the world, according to data compiled by Bloomberg, though hospitalizations have continued to tick up in recent days even as cases begin to ease. Prime Minister Lee Hsien Loong said in a Facebook post last week that "the Heightened Alert should be over" by the time Singapore holds its National Day Parade Show on Aug. 21

The 2022 winter Olympics in Beijing could proceed without spectators, International Olympic Committee Executive Director Christophe Dubi said in an interview with Bloomberg TV.

"Let's see how the pandemic evolves around the globe and especially in China, and then let's look at the consequence of participation for spectators," he said on Thursday. "We have heard a number of the athletes say, 'What matters is that we can compete, and we've gotten used to participating even without spectators.' But if you have the choice, you would prefer to have spectators."

Beijing 2022 organizers haven't said anything about whether foreign or domestic spectators will be allowed to attend, and tickets aren't on sale yet.

China imposed new travel and movement restrictions across the nation, including in its highly protected capital of Beijing, as a delta-driven outbreak grew to over 500 symptomatic cases scattered across 15 provinces and municipalities.

Public transport and taxi services were curtailed in 144 of the worst-hit areas nationwide, while officials curbed train service and subway usage in Beijing, where three new cases were reported Wednesday. Hong Kong re-imposed quarantine on travelers from the mainland, though an exception remained for the southern Guangdong province which neighbors the financial city. 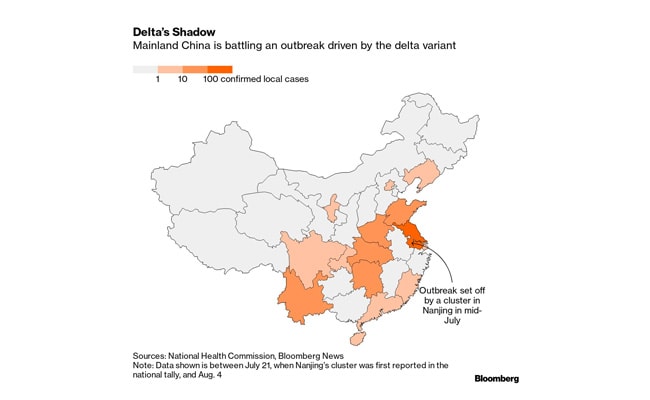 In just two weeks, confirmed cases -- people infected and sickened by the virus -- have grown to more than 500. The infections can be traced back to three cluster areas in China: an outbreak among airport cleaning staff in eastern city Nanjing, another found at a hospital treating Covid patients in Zhengzhou and sporadic cases detected in Yunnan, the province bordering Myanmar.

Traffic has thinned on some of China's typically busy city roads amid the coronavirus resurgence that's raising concerns about near-term fuel demand in the major Asian consumer.

The Tokyo Olympics added a record 31 Covid-19 cases, one of which is an athlete, according to its positive case list.

The athlete is a Greek artistic swimmer, bringing total infections on the team to six. As of yesterday, the team previously had five of 12 competitors and officials test positive

Sydney reported a record number of new daily delta variant cases on Thursday, with authorities to enforce stay-at-home orders beyond Australia's largest city as Covid-19 spreads north into other regions.

“Every jurisdiction around the world is finding delta challenging,” Berejiklian said. “We can try and eliminate it but we know the vaccine is critical to stopping the spread.” 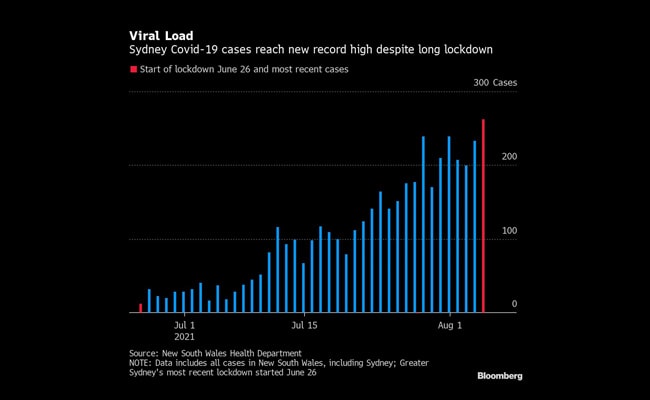 Fully vaccinated visitors arriving in England from France will no longer have to isolate for 10 days, a loosening of restrictions that puts them in the same category as travelers from most other European countries.

The U.K. also eased rules for arrivals from India, Bahrain, and travel hubs the United Arab Emirates and Qatar. Those countries will move from the U.K.'s highest-risk "red" list to its medium-risk "amber" list, meaning arrivals will no longer need to quarantine in a government-approved hotel.

Six other European nations, including Germany, were added to the lowest-risk "green" list, meaning all visitors can avoid quarantine whether or not they are fully vaccinated. All changes will come into effect from 4 a.m. on Sunday, Aug. 8.

The Biden administration is developing a plan to require nearly all foreign visitors to the U.S. to be fully vaccinated against Covid-19, according to a White House official.

Florida hospitals are struggling to get oxygen due to a rise in Covid-19 cases attributable to the delta variant and Florida Governor Ron DeSantis's decision not to declare another state of emergency.

A shortage of drivers who are qualified to transport oxygen, as well as restrictions around how long truck drivers can be on the road - which went back into effect following the expiration of the public health emergency in the state - means that the supply isn't getting to the hospitals that need it most.

Organizers of the 2021 New York International Automobile Show have canceled the event for the second year in a row, citing concerns over the spread of the Covid-19 delta variant.

The annual event was to be held in its traditional venue, the Jacob K. Javits Convention Center in Manhattan. This marks the second-consecutive year that the 121-year-old New York Auto Show was canceled. The organizers expressed confidence the show will return to its regular spring schedule in April 2022.

Florida now has a record 11,906 adults patients hospitalized with confirmed Covid-19, up from 11,515 a day earlier, further surpassing the peak from the previous summer's wave, according U.S. Department of Health & Human Services data.

A total of 12 of 238 hospital facilities reported critical staffing shortages, but that number is down from as high as 33 over the weekend, the HHS data show.

The U.K. will offer coronavirus vaccines to people age 16 and over, after its medicines regulation recommended the change. U.K. Health Secretary Sajid Javid accepted a recommendation from the Joint Committee on Vaccination and Immunisation that young people age 16 and over should get the Pfizer-BioNTech vaccine,

The World Health Organization called for a moratorium on booster shots to enable poorer countries to catch up in vaccination rates.

The halt on third doses should be in place until at least the end of September, Director-General Tedros Adhanom Ghebreyesus said at a media briefing on Wednesday. That would help achieve the WHO's goal to vaccinate at least 10% of the population in every country by that date, protecting health-care workers and vulnerable people.

The European Commission approved a contract with Novavax Inc. for up to 200 million doses of the U.S. company's Covid vaccine, according to statement. The Novavax vaccine is under rolling review by the European Union's drug regulator in view of a potential market authorization.