The scuffle took place hours before Moon met with Chinese President Xi Jinping in an attempt to ease tensions over the US deployment of a missile defence system in South Korea. 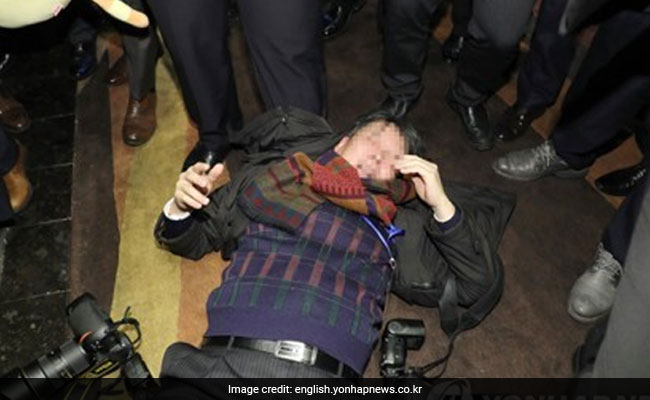 The scuffle took place hours before Moon met with Chinese President Xi Jinping in an attempt to ease tensions over the US deployment of a missile defence system in South Korea.

The incident occurred at a Beijing convention centre during the opening ceremony of a trade partnership event attended by Moon, who began his four-day state visit on Wednesday.

The guards then grabbed one photographer by the neck and threw him to the floor, and seized another's camera, according to the Korea Press Photographers Association (KPPA).

When the guards tried to block journalists from entering another event hall, even though they showed identity cards, a photographer surnamed Lee objected.

More than 15 Chinese guards surrounded Lee and "punched him repeatedly, before even kicking him on the face after he was knocked to the floor," the KPPA said in a statement, calling the incident an "unimaginable act".

The encounter left him with a bloody nose, a severe injury to his right eye, nausea and dizziness.

Officials from the South Korean presidential office and other reporters tried to stop the incident "to no avail", the association added.

South Korea's KBS News aired footage showing men in suits dragging and grappling with an unidentified journalist as bystanders shouted "stop, stop, stop" in English and an expletive in Korean.

"Who would have thought that state officials could beat up reporters from a partner country like this at a national event attended by head of state, which is neither a warzone nor a violent protest site," the KPPA said.

"Is this Chinese-style etiquette to invite guests and beat them up in your living room?"

Chinese foreign ministry spokesman Lu Kang told a regular press briefing that while the trade show had been organised by the South Korean side, "if someone is hurt, of course we are concerned about that."

Both countries had made "meticulous preparations" for Moon's China trip "with the same goal in mind, which is that we want to make sure that this visit is very successful," Lu said.

"We hope it's just a minor incident."

The Foreign Correspondents Club of China (FCCC) said it was "concerned" about the incident, which follows several reports of journalists being subjected to violence while reporting in the country this year.

"Violence against journalists is completely unacceptable, and the FCCC calls on the Chinese government to investigate and address the incident," it said in a statement.

The guards may have been hired by the event's South Korean organisers, the country's Yonhap news agency cited an official as saying, but were still accountable to the Chinese police.

South Korean officials have lodged a complaint and demanded a formal apology from China, Yonhap added.

"We made an agreement with China's public security ahead of the event that the press will have access to all ... movement of the president," a South Korean official was quoted as saying by the Joongang Ilbo newspaper.

Promoted
Listen to the latest songs, only on JioSaavn.com
"But China made an arbitrary decision to block our press, which led to this preposterous disaster," the official said.