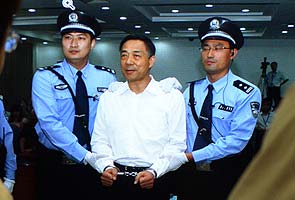 Jinan: A Chinese court on Friday rejected fallen politician Bo Xilai's appeal against his conviction and confirmed his life sentence, sealing his fate as authorities look to close a damaging scandal.

The high court of the eastern province of Shandong "ruled to reject the appeal and upheld the original sentences," court spokesman Hou Jianjun told reporters.

"The crimes (the first trial) defined were accurate and the sentences were appropriate," he added. "The ruling is final."

Until 2012 Bo headed the southwestern megacity of Chongqing and was one of the highest-ranked politicians in the ruling Communist party, which tightly controls China's courts.

A picture released by state broadcaster CCTV showed Bo in court wearing a black jacket and smiling as he was flanked by two policeman, his hands clasped in front of him.

Security was heavy around the courthouse in Jinan, the capital of the eastern province of Shandong, with hundreds of police officers stationed every few metres around the building and the surrounding streets blocked off, with nearby shops closed.

Bo was last month condemned to life imprisonment on charges of bribery, embezzlement and abuse of power, after a spectacular downfall which exposed infighting within the Communist party ahead of a once in a decade transition of power.

The courts have no further obligation to reconsider his case after the appeal, lawyers said, and Bo is unlikely to appear in public again.

He was not present for the consideration of his appeal, which took place earlier this month in a "closed hearing", a lawyer with direct knowledge of the case told AFP.

Friday's court decision "will be the final verdict. After that, the process is over", the lawyer said.
According to Chinese law, Bo will not be able to lodge any further formal appeals, and while he can submit a "petition" to China's supreme court it is not required to take further action.

Analysts have said that the verdict against Bo was decided as a result of backroom bargaining between elite members of the Communist party -- some of whom are still thought to be allies of his.

"From the beginning, the verdict was not totally the court's decision... it's very likely that top leaders played a role," said He Weifang, a law professor at Peking University.

Bo, whose father was one of Communist China's "Eight Immortals", its most prominent revolutionary leaders, was ousted last year after a lurid scandal which saw his wife convicted of the murder of a British businessman.

Bo's trial in August revealed a lifestyle far in excess of what Communist Party officials on modest salaries should be able to afford, with evidence of bribes from rich businessmen, including a close associate who bought his family a villa in France.

His defiance over the course of the hearings astonished a public unfamiliar with the open airing of top-level intrigue and was in stark contrast to previous Chinese political trials, in which most defendants have humbly confessed their crimes in opaque court proceedings.

Promoted
Listen to the latest songs, only on JioSaavn.com
Bo's populist policies in Chongqing won him supporters across China, but his openly ambitious approach also alienated other top party leaders, who saw it as harking back to a bygone era of strongman rule.

The decision comes as the party attempts to show it is cracking down on corruption and government waste.
Comments
Bo Xilai