Covid In Shanghai: Shanghai has been placed under some of the most severe measures since the virus first emerged in Wuhan in 2019, with a strict lockdown leaving many struggling to get enough food and thousands sent to quarantine centres. 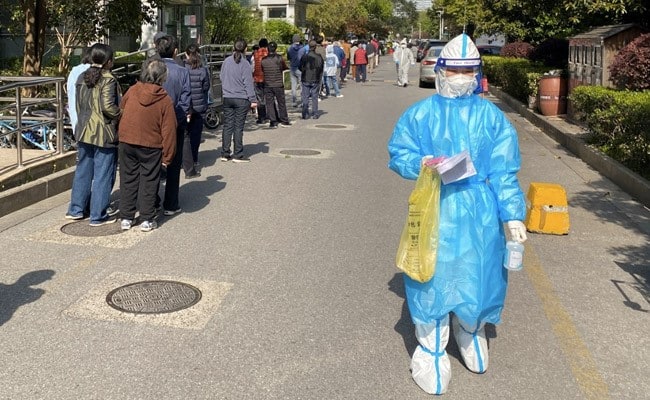 The United States announced Tuesday it had ordered all non-essential employees at its Shanghai consulate to leave, while voicing concerns for the safety of Americans in China as the government enforces hard lockdowns to contain Covid-19.

China has stuck to a policy of "zero Covid", aiming to eliminate infections through rigid lockdowns, mass testing and travel restrictions.

But the policy has come under strain since March as more than 100,000 cases in Shanghai have led to a lockdown of the city's 25 million inhabitants, sparking widespread public outcry over food shortages and an inflexible policy of sending anyone who tests positive to quarantine centres.

The US State Department ordered the departure "due to the ongoing Covid-19 outbreak", a spokesperson from its Beijing embassy said in a statement.

American diplomats have also raised "concerns about the safety and welfare of US citizens with People's Republic of China officials," the statement added.

"It is best for our employees and their families to be reduced in number and our operations to be scaled down as we deal with the changing circumstances on the ground," it read.

While some Shanghai residents who live in neighbourhoods deemed a low virus risk have been allowed outside their homes this week, unclear rules and the threat of re-entering lockdown if new cases are found has left most in limbo.

Criticism of China's unrelenting approach to crushing outbreaks is mounting, more so as the rest of the world learns to live with the pandemic.

In a letter seen by AFP, it urged the Chinese government to shift its approach by vaccinating the elderly -- among whom inoculation rates are low -- and allowing people with mild Covid to quarantine at home.

Beijing has hit back against the US complaints, with Chinese foreign ministry spokesman Zhao Lijian on Saturday slamming the United States' "groundless accusations" and insisting that China's policy was "scientific and effective".

Shanghai authorities have vowed the city "would not relax in the slightest", preparing tens of thousands of new beds to receive every person who tests positive for the virus -- whether or not they show any symptoms.

Residents have taken to social media to vent about food shortages and heavy-handed controls, including the killing of a pet corgi by a health worker and a now-softened policy of separating infected children from their virus-free parents.

On Tuesday, Shanghai residents were still deciphering the precise details of an announcement that allowed some living in areas with relatively few virus cases to begin leaving their compounds.

Monday's adjustment set three levels of controls depending on the caseload.

But freedom still appears far off for most in the city, with at least one southern district at the lowest level only allowing residents out once a day to buy supplies.

Chinese social media was abuzz on Tuesday over a viral audio clip that appeared to show a Shanghai couple pleading with police not to send them to a quarantine facility after they were reportedly misdiagnosed as Covid cases.

Authorities later said the couple eventually agreed to cooperate with officials and that "no misjudgment had occurred".