China Build Amphibious Aircraft To Get Wings In May 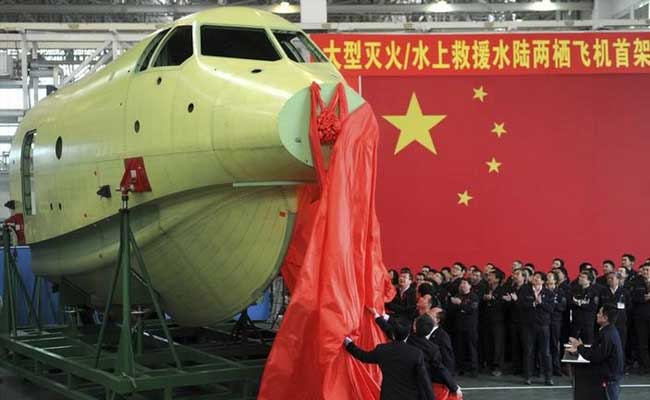 The aircraft will take its first flight over land and then another on water in the second half of 2017.

Shanghai: China's domestically developed AG600, the world's largest amphibious aircraft, will make its maiden flight in late May from the southern city of Zhuhai, the official Xinhua news agency said on Thursday.

China has stepped up research on advanced military equipment as it adopts a more muscular approach to territorial disputes in places such as the busy South China Sea waterway, rattling nerves in the Asia-Pacific region and the United States.

The aircraft will take its first flight over land and then another on water in the second half of 2017, Xinhua said, citing its manufacturer, state-owned Aviation Industry Corp. of China (AVIC).

AVIC has spent almost eight years developing the aircraft, which is roughly the size of a Boeing 737 and is designed to carry out marine rescues and battle forest fires.

The aircraft has received 17 expressions of interest so far, Xinhua added. It has a maximum flight range of 4,500 km (2, 800 miles) and a maximum take-off weight of 53.5 tonnes.

China is in the midst of a massive military modernisation programme, ranging from testing anti-satellite missiles to building stealth fighters and the country's first indigenous aircraft carrier, to add to an existing one bought from Ukraine.

The new carrier could be launched soon, state media have reported, though it is likely to be several years before it fully enters service.

On Thursday, Chinese Defence Ministry spokesman Wu Qian told a monthly news briefing the outfitting of the new carrier was proceeding smoothly and people would not have to wait long for more "good news". But he did not elaborate.

(Except for the headline, this story has not been edited by NDTV staff and is published from a syndicated feed.)
Comments
China's AG600China's Ambitious Aircraft AG600China Advanced Military