Case Against Bangladeshi Hindu Who Told Trump About Persecution Rejected

Priya Saha attended a meeting at the White House on July 19 and a video of the meeting with Trump subsequently went viral on social media, sparking a controversy back home. 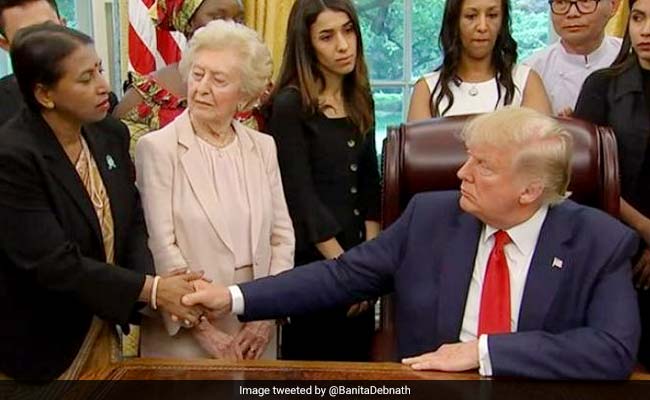 She was seen telling Trump that 37 million people of the minority groups disappeared from Bangladesh.

Bangladesh Prime Minister Sheikh Hasina has disapproved a planned government move to file sedition charges against a Hindu woman who told US President Donald Trump in Washington that the minority communities in her country were being persecuted, a senior minister said on Sunday.

Priya Saha, organising secretary of the Bangladesh Hindu Buddhist Christian Unity Council (HBCUC), attended a meeting at the White House on July 19 and a video of the meeting with Trump subsequently went viral on social media, sparking a controversy back home.

In the video, she was seen identifying herself as a Bangladeshi national and telling the US President that 37 million people of the minority groups disappeared from Bangladesh.

Reacting to Ms Saha's statement, Road Transport Minister and ruling Awami League general secretary Obaidul Quader on Saturday told reporters that she has made a "false, purposeful and treasonous remarks" and a sedition case will be filed against her.

However, Mr Quader on Sunday said PM Hasina has disapproved the move to file sedition charges against Ms Saha without obtaining her explanation on her comments.

"The prime minister last night sent me a message (from the UK where she is on an official tour), saying no legal action was required to be initiated hastily," Mr Quader told a media briefing at the party's Dhanmandi office.

But, he maintained that Ms Saha must make a public statement, explaining what actually she wanted to tell Trump.

Mr Quader said Liberation War Affairs Minister AKM Mozammel Haque was set to register a sedition case against Priya Saha, but he already conveyed him the premier's message and talked to Law Minister Anisul Huq and Home Minister Asaduzzaman Khan Kamal as well in this regard.

Mr Quader's comments came a day after he said a process was underway to try the woman on sedition charges as her allegation was "absolutely false".

The foreign ministry termed as "blatant lies" Ms Saha's complaints, suspecting that she was led by an "ulterior motive".

Mr Quader, however, said the cases were unlikely to proceed as the country's law debarred anyone from filing any sedition case without government permission.

The law minister, meanwhile, said Ms Saha made "utterly false allegation to gratify her personal desires and she should be ignored but "I think we should not give so much importance to this".

"We should highlight the truth and ignore her. I think it is not right to term such small matters as seditious offence, but it is up to judiciary and judges to decide," he told media persons on the sidelines of the opening ceremony of a judges training programme.

He said it was not the Hindu community members alone, "all the people say that we all live amid communal harmony in Bangladesh".

"If you go through history, you would find that least number of communal riots took place in Bangladesh," he said.

Ms Saha was among the five Bangladeshis and two Rohingya refugees the US Embassy in Dhaka sent to the White House.

She also attended a ministerial meeting on advancing religious freedom hosted by the US Department of State.

The HBCUC, meanwhile, distanced itself from Ms Saha's comments with one of its leaders saying that her comments were her own and that she did not represent the Council in the meeting with the US President.

"We are embarrassed... the comments she made were her own and not ours," HBCUC spokesman Kajal Debnath told news agency Press Trust of India.

Kajal Debnath added that he believed the remarks she made in her interactions "with the president of a foreign country in a foreign land is unethical and unexpected".

He said compared to previous governments of Bangladesh, the incumbent one of Prime Minister Sheikh Hasina was "much more minority-friendly, and we (minorities) want to live here amid harmony".