On the road to the site, police discovered "downed trees, tar covered stumps, wire, boards with spikes in them, and fires" blocking the way. 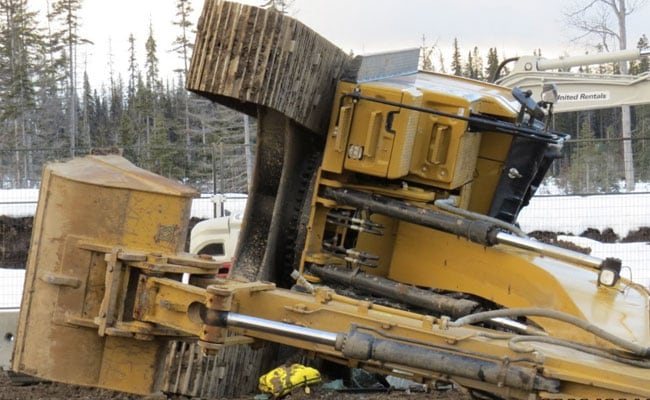 canada Protests: Heavy machinery was overturned with their windows and engines smashed.

Canadian police said Friday they were investigating a "violent confrontation" at a gas pipeline construction site in the western province of British Columbia.

Shortly after midnight Thursday, police attempted to inspect the Coastal GasLink (CGL) construction site near Houston, where they say "approximately 20 people, some armed with axes" had been reported to be "attacking security guards and smashing their vehicle windows," according to a statement released by the Royal Canadian Mounted Police.

On the road to the site, police discovered "downed trees, tar covered stumps, wire, boards with spikes in them, and fires" blocking the way.

"As police worked their way through the debris and traps, several people threw smoke bombs and fire lit sticks at the police, injuring one officer," the statement added.

When the police finally arrived at the worksite, they discovered "a multimillion dollar path of destruction."

Photos accompanying the statement showed heavy machinery overturned or their windows and engines smashed, and a trailer with a wall ripped off.

"This coordinated and criminal attack from multiple directions threatened the lives of several workers," said CGL in a statement.

"In one of the most concerning acts, an attempt was made to set a vehicle on fire while workers were inside," the company, headquartered in neighboring Alberta province, added.

The CGL pipeline aims to bring natural gas from eastern British Columbia to be liquified in a facility on the Pacific coast, before being exported.

The project has stirred controversy in Canada for years.

At the beginning of 2020, protesters against the pipeline mobilized across multiple Canadian provinces with some blocking rail traffic for weeks.

At the moment, the CGL pipeline is 60 percent completed, the company said.