Mudslides triggered by heavy rains destroyed several major roads and killed at least one person. Officials say the death count could rise, because other people are missing. 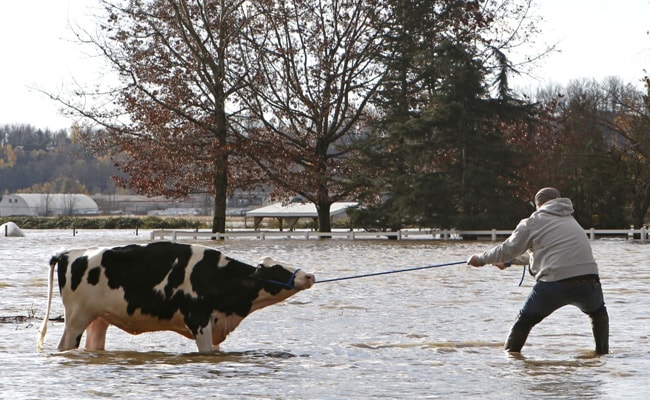 Several towns have been completely cut off and at least one reported that food was starting to run low.

The Canadian province of British Columbia could introduce a state of emergency on Wednesday to help deal with massive floods that cut access to the country's largest port and stranded thousands.

Mudslides triggered by heavy rains destroyed several major roads and killed at least one person. Officials say the death count could rise, because other people are missing.

"What we're seeing is a natural disaster," provincial Public Safety Minister Mike Farnworth told a briefing late on Tuesday. "A province-wide state of emergency is very much on the table."

Several towns have been completely cut off and at least one reported that food was starting to run low.

"There is not much left in the grocery stores. They just can't restock, there is no way to get through," he told the Canadian Broadcasting Corp, saying that although some food had been airlifted in, there was just a day's supply left.

Prime Minister Justin Trudeau spoke to provincial Premier John Horgan on Tuesday and said Ottawa would do whatever it could, be it providing short-term assistance or helping with long-term rebuilding, a statement from Trudeau's office said.

The town of Abbotsford to the east of Vancouver issued an emergency warning on Tuesday night, ordering all residents from one region to evacuate immediately.

The area has a major dairy industry and on Tuesday farmers worked desperately to save their animals from rising waters, in some cases tying ropes around their necks and pulling them with personal watercraft to higher ground.

"I know it's hard for farmers to leave their livestock, but people's lives are more important to me right now than livestock and chickens," Abbotsford Mayor Henry Braun told reporters.

This disruption comes as global supply chains are already struggling to deal with problems caused by COVID-19.