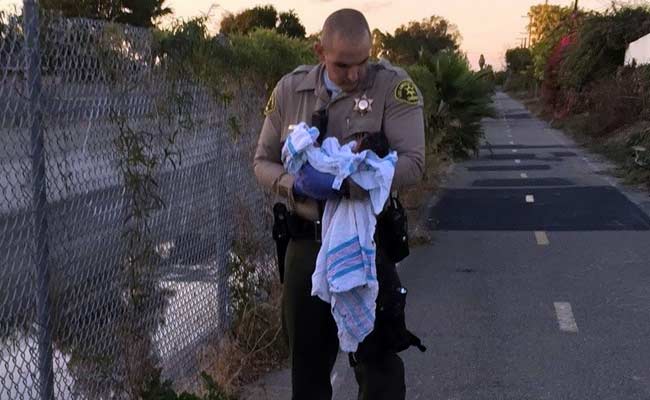 A deputy holds a baby girl where she was found abandoned in Compton, California.

To passers-by, her small screams sounded like cat cries.

The baby girl - not more than two days old - had been buried alive, authorities said, beneath shards of "asphalt and rubble" near a bike path in Compton, a city in South Central Los Angeles. When two women the newborn late Friday afternoon, her voice was weak and her skin was cold.

"My sister said, 'Can you hear a baby crying?' And I said, 'No, I don't know,'" Angelica Blount told CBS Los Angeles. "That might be a cat.

"It made me really sad to hear the baby's wails," she told the station.

Authorities are now searching for the infant's parents.

Los Angeles County Sheriff's deputies responded to the scene along a popular path near a riverbed in Compton.

There, they found the infant, wrapped in a thin blanket and buried beneath the ruins.

"As they searched, deputies heard a baby's muffled cry and located a newborn baby girl buried alive under pieces of asphalt and rubble inside a crevice located along the bike path," according to a statement from Los Angeles Sheriff's Department. "Deputies removed the pieces of asphalt and debris and rescued the baby from the crevice. The baby was wrapped in a blanket and cold to the touch. They checked her vital signs and called for paramedics."

Authorities said the child was transported to a nearby hospital where she was listed in stable condition. She was believed to be only 36 to 48 hours old when deputies found her.

"We do know that if the child had spent the night there in those conditions the baby wouldn't have survived," Sgt. Marvin Jaramilla said Saturday, according to CNN.

Authorities have asked for the public's help to learn more about abandonment and locate the child's parents. If the parents are found, they could face attempted murder and child endangerment charges, CNN reported.

"Some parents of newborns can find themselves in difficult circumstances," the sheriff's department said in the statement. "Sadly, babies are sometimes harmed or abandoned by parents who feel that they're not ready or able to raise a child, or don't know there are other options. Many of these mothers or fathers are afraid and don't know where to turn for help."

Last week, another abandoned baby - with its umbilical cord still attached - was discovered in a Christmas manger in a New York City church's nativity scene.

California, among other states, has a safe-haven law to encourage parents or custodians who want to surrender an infant to hand over the child to workers at a hospital or fire station. Over the past 13 years, 685 newborns have been surrendered in the state - including 73 last year - according to data from California's Department of Social Services.

"A parent stuck in this difficult situation can safely surrender their baby at any hospital or fire station in Los Angeles County," police said, "no questions asked."