The case for the North Korean leader's cameo role in a new X-Men movie came during a brisk two-mile stroll up snowy Mount Paektu a week or so ago, as reported by the state-controlled Korean Central News Agency. 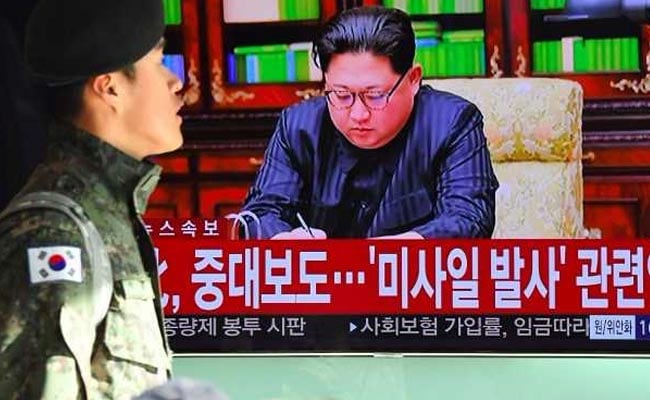 North Korea's state-run media is known for making a variety of claims about its leaders. (File)

In rare free moments, when Kim Jong Un isn't calling President Donald Trump a dotard, launching ballistic missiles into the Sea of Japan or engaging in general dictatoring, he apparently goes on leisurely mountain hikes and flexes his never-before-reported superpower: controlling the weather.

The case for the North Korean leader's cameo role in a new X-Men movie came during a brisk two-mile stroll up snowy Mount Paektu a week or so ago, as reported by the state-controlled Korean Central News Agency.

The 9,000-foot mountain is normally a wintry mess in December, according to the news agency, but during Kim's visit, it was a "marvelous scene with glee at the reappearance of its great master." When Kim ascended to the top, the mountain showed "fine weather unprecedented."

It was obviously an homage to Kim, KCNA reported, the man "who controls the nature."

The fine weather was fortuitous, as pictures showed Kim made the arduous trek up the mountain in dress slacks and shiny leather shoes.

Of course, it should be said that KCNA and other state-sponsored media are known for making a wide variety of claims about North Korea's leaders. Among them:

- Kim Jong Un and Korean scientists formulated a miracle drug, according to Newsweek - a combination of ginseng and "rare earth elements" that, with one injection, can cure or treat AIDS, Ebola, many cancers, heart disease, impotence, the common cold, "harm from use of computers," epilepsy, all forms of hepatitis, venereal disease and aging. It also, for some reason, renders its users "anti-radioactive."

- Kim Jong Un could drive at age 3 and was a competitive sailor at age 9.

- Kim Jong Un and North Korean archaeologists also found a unicorn's lair, or at least "recently reconfirmed" the location of unicorns ridden by the ancient Korean King Tongmyong, according to the Guardian. If people are distrustful of the discovery, it has a rectangular rock in front that reads: "Unicorn Lair."

- Korean news agencies reported that Kim's father, Kim Jong Il, learned to walk at 3 weeks old and once shot a round of golf that included 11 holes-in-one.

- People surprised by his greatness should only remember the day he was born, when a double rainbow suddenly appeared in the sky.

- Also, Kim Jong Il could control the weather, too.

Those claims could not be independently corroborated on Monday.

It is not uncommon for nations to want to show their leaders in a positive light. Ugly official portrayals of U.S. presidents are rare, although there are always exceptions.

But North Korea appears to be taking a lesson from the ancient Egyptians, essentially deifying the leader of their country.

"His eyes reflected the strong beams of the gifted great person seeing in the majestic spirit of Mount Paektu the appearance of a powerful socialist nation which dynamically advances full of vigor without vacillation at any raving dirty wind on the planet," the article about Kim Jong Un's ascent up Mount Paektu read.

And while standing atop the sacred mountain, the supreme leader of the Democratic People's Republic of Korea, in full control of the wind and the snow and the clouds, chose to make a few declarations, according to the article.

Promoted
Listen to the latest songs, only on JioSaavn.com
Perhaps, he said, they should consider sprucing up the visitors' center.