In her seven-minute "farewell message" video, Melania Trump said she was "humbled" to serve as first lady and called it "the greatest honor of my life." 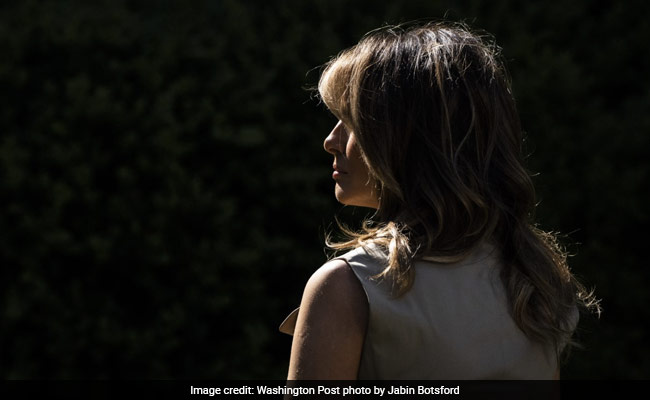 In her final days as first lady, Melania Trump has largely stayed away from the West Wing. While her husband spends his time there in anger - though aides said his dark mood has lightened since he began his own send-off - she has shown no sign of any disappointment for how the president's era is ending.

Instead, she has been busying herself with finding a new school for her son, Barron, in Florida and working on her own farewell video message to the country, which she released Monday.

Several people who have been in touch with Melania Trump said she is aware of the intense criticism that she and her husband have gotten since the deadly Jan. 6 Capitol riot, but that unlike her spouse she appears completely unfazed. They said she would have been happy to attend President-elect Joe Biden's swearing-in ceremony, as every outgoing president and first lady have for the past 152 years. But rather than dwell on what could have been, she focuses on what she has control over: choreographing her own exit, trying to solidify her legacy as a first lady who devoted much time to renovations of the White House, and making plans to continue her Be Best initiative. Quietly, she has also been working with Chief Usher Timothy Harleth to facilitate the move-in of the Bidens.

"She has hours left as first lady, but she is not the type to wander around the rooms of the White House in deep reflection of what happened, of what could have been," said one person in touch with her. "She is Melania - she keeps the focus on what's next."

Another said that unlike her furious husband, "Melania is good."

Since Jan. 6, every day has dumped more bad news onto the president, including his historic second impeachment. But one person close to the president said it can be hard to predict what will bother him most and that even with all that was going on, he was particularly upset that Lady Gaga, Jennifer Lopez, Tom Hanks and other stars agreed to perform as part of Biden's inaugural celebrations.

Donald Trump, in his days as the star of "The Apprentice" reality-TV show, often attended star-studded events. A believer in the power of being associated with marquee names, he hired Elton John and Billy Joel to sing at his and Melania's wedding in 2005. But his rhetoric, hard-line immigration policy and other stances during the 2016 campaign led Hollywood to largely boycott his inauguration. Now, as Trump rages about what he describes as unfair treatment from all sides - from people he hired, from businesses he helped with his policies, from members of his own party and from celebrities - his wife shrugs and moves on.

In her seven-minute "farewell message" video, Melania Trump said she was "humbled" to serve as first lady and called it "the greatest honor of my life." She noted "all of the people I have taken home in my heart," including soldiers, law enforcement officials, children, mothers, caregivers and all the nurses, doctors and other health-care professionals who have responded to the coronavirus pandemic.

She read from prepared remarks at a White House lectern and did not specifically address the Capitol riot or her husband's role in stoking it, but she stressed her concern about violence. "Be passionate in everything you do," she said. "But always remember that violence is never the answer and will never be justified."

She urged Americans to "focus on what unites us," and "to raise above what divides us, to always choose love over hatred, peace over violence and others before yourself."

"Together, as one national family, we can continue to be the light of hope for future generations and carry on America's legacy of rising our nation to greater heights through our spirit of courage, goodness and fate," she said.

The video was designed in part to separate herself from the president's pugilistic tone, according to a White House aide. Some had hoped that she would at least mention, if not welcome, incoming first lady Jill Biden, but she did not.

After she departs the White House with her husband Wednesday, she plans to duck out of the spotlight for a while, friends said. But she plans on resurrecting her Be Best campaign that focused on children's well-being, including raising awareness of the dangers of cyberbullying and opioids and other drugs.

"She plans to continue and expand it," said Kellyanne Conway, a former White House adviser who has stayed in touch with her. "She knows her input and influence on her legacy issues can be greater outside the White House."

Melania Trump has been told that she will have fewer restrictions and a freer hand to do what she wants once she is no longer first lady. Paolo Zampolli, a businessman and former modeling agent who introduced Melania Knauss to Trump in the 1990s, said she is determined to grow Be Best and "continue all the work she did for children."

The soon-to-be-former first lady also is expected to be involved in the site selection, planning and design of the Trump presidential library, which probably will be located in Florida. Her stepdaughter Ivanka Trump also has expressed interest in the library and has bought a home in Florida. From the start of the Trump administration, Melania and Ivanka Trump clashed. Before Melania officially moved into the White House, Ivanka Trump told people that she would like the first lady's office to be renamed the "first family's office." Both women also wanted to decorate the Oval Office - in very different styles - until the president stepped in and canceled both plans.

"The library location has not even been scouted yet, but Ivanka has made her interest clear," said one person aware of the discussions. "As usual, Melania will have to contend with the other family members."

In addition to Barron, President Trump has three children from his first marriage - Ivanka, Don Jr. and Eric - and one daughter, Tiffany, from his second marriage.

Melania Trump had hoped her husband would win in November: She campaigned for him, flying in the final days before the election to key states, including Wisconsin, where she called Trump's first impeachment a "sham" and described Biden as a "socialist." But while President Trump spent two months disputing the election results, his wife accepted that Biden had won.

Conway said the first lady has urged the president to end his "stop the steal" campaign that alleged voter fraud, and that Melania Trump did not support holding the Jan. 6 rally.

"She was against the protracted challenge to the election results, especially after the results were certified," Conway said. "I know she was against the [Jan. 6] rally and saying things to him. I think she thought it was futile and possibly chaotic. She was the only family member who was not there."

According to Conway, the first lady was complying with requests for record-keeping regarding items at the White House and not watching television when a mob first breached the Capitol. When she saw what was happening, she urged her husband to intervene and end the riot.

Melania Trump wants to be seen as independent from her husband, but how successful she will be at that task is unclear. Although she did not support the president's false claims that the election was stolen from him, she has over the years backed up other highly controversial claims by her husband, including his "birther" conspiracy theory that Barack Obama was not born in the United States and therefore not a legitimate president.

The first lady also remained silent for several days after the deadly riot, then sounded absorbed with her own image at a time of national crisis in a statement she released Jan. 11. "I find it shameful that surrounding these tragic events there has been salacious gossip, unwarranted personal attacks, and false misleading accusations on me," she wrote, while calling for a national "healing."

MaryAnne Borrelli, a professor of government at Connecticut College, said it is going to be difficult for the first lady to separate herself from a president impeached for inciting violence at the Capitol. "We don't know all she has done behind the scenes," Borelli said, but people know she did not invite Jill Biden to the White House and joined her husband in abandoning other "powerful political symbols of the transfer of power."

Someone who has known Melania Trump for many years said people forget that she became a U.S. citizen when she was 26. She is the first spouse of a president who did not grow up speaking English and was raised modestly in a socialist country. As an old friend said, no matter how bad some days in the White House were, it was still "a dream come true."

"Over the last four years, my family has had the immense honor of being able to call the 'People's House' our home," Melania Trump said in a separate statement released Monday that was aimed at raising awareness of the renovations she oversaw in the White House. Widely criticized for focusing her efforts on the White House tennis court while people were dying in the coronavirus pandemic, this time she addressed the "devastating and unexpected loss of life" and hardship, and said that "as a result, it was with a great sensitivity to the wider national backdrop that I unveiled two long-planned projects on the White House grounds."

Her parents, who have been a constant presence with her in the White House, also are moving to Palm Beach, Fla. While the president's team waged legal battles alleging widespread fraud, the first lady, who has a considerable wardrobe and shoe collection, began packing shortly after the November election. It may come as no surprise then that, according to several people who know the couple, Melania Trump is far more mentally ready for the post-presidency than her husband.