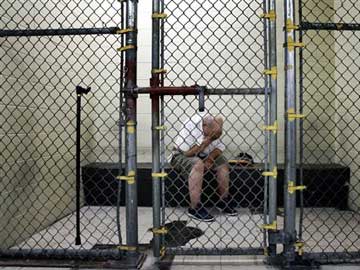 In this June 26, 2014 photo, a US veteran with post-traumatic stress sits in a segregated holding pen at the Cook County Jail after he was arrested on a narcotics charge in Chicago.

Sacramento: California prison officials pledged on Friday to take a gentler approach with mentally ill inmates in one of the largest prison systems in the US after graphic images of prisoners being repeatedly doused with pepper spray in their cells were made public several months ago.

The Department of Corrections and Rehabilitation said in a federal court filing that its move will create a system-wide culture change in how 33,000 mentally ill offenders are restrained and isolated.

The state is revising its policies after US District Court Judge Lawrence Karlton ruled in April that California's treatment of mentally ill inmates violates their constitutional safeguards against cruel and unusual punishment.

He acted after the graphic video tapes made by correctional officers were released, showing guards throwing chemical grenades and pumping large amounts of pepper spray into the cells of mentally ill inmates, some screaming and delirious.

In a separate incident, a mentally ill inmate, who breathed through a hole in his throat, died after being pepper-sprayed.

Guards generally were acting after the inmates refused to take their medications, would not leave their cells or defied orders in other ways, officials said.

The state now requires guards to consider the mental health condition of each inmate before using force and to employ the least amount of force necessary while seeking alternatives when there is no imminent threat of harm.

That generally requires guards to have a cool-down period before using force - time in which a mental health professional will try to intervene with the inmate.

Pepper spray can't be used at all in many specialised mental health facilities within the prisons without the permission of a senior prison official.

Instead of physically dragging a combative inmate from a cell, guards will be allowed to enter the cell just long enough to administer the inmate's medication before withdrawing.

The department's new limits on housing mentally ill inmates in isolation are just as important because that is where the bulk of suicides occur, Bien said.

Promoted
Listen to the latest songs, only on JioSaavn.com
The new policies are designed to lessen the amount of time that inmates with mental illness spend in solitary confinement, while making their stays there more manageable by providing them with more exercise, visits, personal property and privileges.

"It's still a high-risk period for suicide," Bien said. However, "all those things are designed to change what segregation is now, to make it less horrible for people."