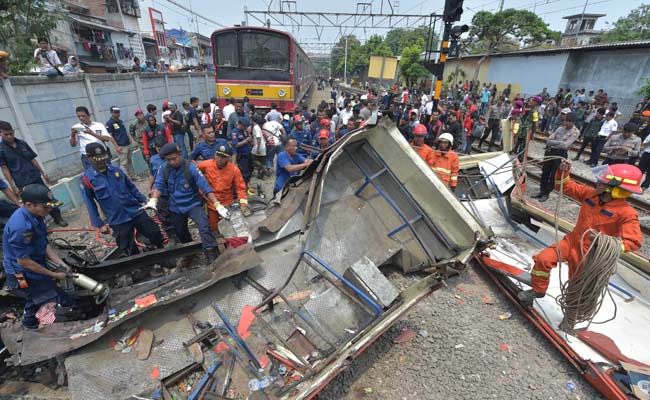 Indonesian firefighters move the wreckage of a minibus after it collided with a train in Jakarta on December 6, 2015. (AFP Photo)

Jakartaa: A collision between a commuter train and a minibus on a level crossing in the Indonesian capital Jakarta on Sunday killed at least 14 people and injured several others, an official said.

"So far we heard the number of fatalities has reached 14 people," a transport ministry spokesman told AFP. A team from the ministry and the National Transportation Safety Committee would be deployed to investigate the cause of the crash, the spokesman added.

Eva Chairunisa, a spokeswoman for train operator Kereta Commuter Line, said the accident happened shortly before 9am when a train slammed into a packed minibus as it crossed a railway line in the north of the city.

The bus drove past a closed gate at the level crossing before it was hit, she said.

"No one on the train was hurt in the accident but several bus passengers died," she told AFP.

Chairunisa said the train driver followed standard procedures and sounded the horn to warn the bus before the accident happened.

The line was partially closed following the collision.

Transport accidents are common in Jakarta, where roads are heavily congested and buses and trains are often old and badly maintained.

In 2013 seven people were killed and scores more injured when a commuter train collided with a fuel tanker at a level crossing in Jakarta and burst into flames.

"Who Cares?": Nancy Pelosi Laughs Off Chinese Sanctions Over Taiwan