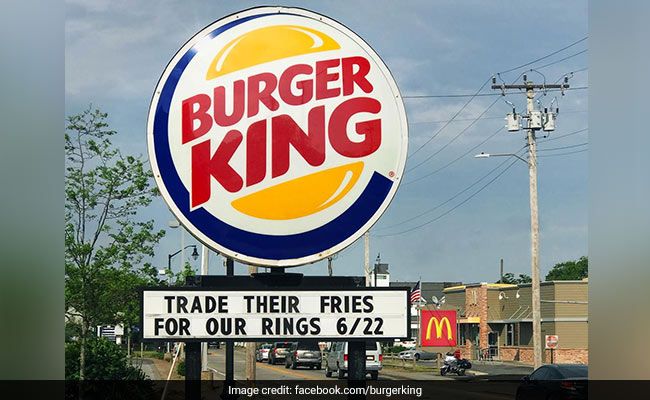 Amid outrage on social media, Burger King deleted the tweet and posted an apology.

Burger King opted to take on gender disparity in the restaurant industry with a new culinary scholarship program and a tweet: "Women belong in the kitchen." It did not go over well.

The fast food chain's United Kingdom division sparked an outcry Monday as critics accused the brand of using a sexist trope as clickbait. Later in the day, the brand tweeted an apology and then deleted the original tweet, citing "abusive comments" in the thread.

The Burger King Foundation, the company's United States-based nonprofit arm, meanwhile, published a full-page ad with similar language in Monday's print edition of the New York Times. "Women belong in the kitchen" was bolded in large font that took up much of the ad's above-the-fold space.

"Fine dining kitchens, food truck kitchens, award-winning kitchens, casual dining kitchens, ghost kitchens, Burger King kitchens. If there's a professional kitchen, women belong there," the ad continued. "But can you guess who's leading those kitchens these days? Exactly. Only 24% of chef positions in America are occupied by women. Want to talk head chefs? The number drops to fewer than 7%."

A similar ad bought at the New York Times' typical standby rate is estimated to cost $65,000, though the price can range depending on the specifics of the ad. The New York Times declined to share the exact cost of Burger King's ad Monday.

We hear you. We got our initial tweet wrong and we're sorry. Our aim was to draw attention to the fact that only 20% of professional chefs in UK kitchens are women and to help change that by awarding culinary scholarships. We will do better next time.

We decided to delete the original tweet after our apology. It was brought to our attention that there were abusive comments in the thread and we don't want to leave the space open for that.

The Burger King Foundation's H.E.R. (Helping Equalize Restaurants) Scholarship will grant $25,000 apiece to two current female employees. Employees must be employed by Burger King or a franchisee, have plans to enroll in an accredited two- or four-year culinary program or university in the U.S. during the 2022-23 academic year, have a high school diploma or GED, and demonstrate financial need and substantial work experience, according to the foundation's website. The foundation will establish similar programs in the United Kingdom and Mexico, Burger King spokeswoman Adrianna Lauricella said in an email.

And it only took you 12 hours and 666k likes pic.twitter.com/rnIxZsklrU

"We are committed to helping women break through a male-dominated culinary culture in the world's fine dining restaurants - and sometimes that requires drawing attention to the problem we're trying to help fix," Lauricella said. "Our tweet in the UK today was designed to draw attention to the fact that only a small percentage of chefs and head chefs are women. It was our mistake to not include the full explanation in our initial tweet and have adjusted our activity moving forward because we're sure that when people read the entirety of our commitment, they will share our belief in this important opportunity."

KFC Gaming tweeted a meme in response to Burger King UK with the caption: "The best time to delete this post was immediately after posting it. The second best time is now."

But Burger King UK rejected the idea. "Why would we delete a tweet that's drawing attention to a huge lack of female representation in our industry, we thought you'd be on board with this as well?" it tweeted. "We've launched a scholarship to help give more of our female employees the chance to pursue a culinary career."

When Niki Winters of Woodland, N.C., enrolled in culinary school in 2002, she says she knew to expect the male-dominated kitchens - a workplace environment she was no stranger to after serving in the Navy, working in the aviation field and studying IT.

Winters worked for catering companies, delis, restaurants and a naval air station galley. She loved the work, but said she experienced discrimination in each kitchen: unequal pay, pressure to outperform her male co-workers, sexual harassment and being denied promotions.

"My immediate reaction to the Burger King headline was, 'Hell yeah, we belong in the kitchen,' but I think that was colored by experience and knowledge that you just don't see a lot of women in head chef positions, especially when you get to fine dining," she said.

But she doesn't expect the scholarship amount to make a huge dent, as the average cost of culinary school tuition starts at $30,000. She said she'd rather see larger employers hire more women and promote them into management and head chef positions.

"I'd especially like them to all commit to paying a living wage to their employees because that's going to lift people up far more than a couple of scholarships," she said.

This isn't the first Burger King advertisement that's sparked controversy. In 2019, the company's New Zealand Instagram account posted a video promoting its Vietnamese Sweet Chili Tendercrisp burgers by showing customers awkwardly trying to eat it with oversized red chopsticks with the caption, "Take your taste buds all the way to Ho Chi Minh City." After social media users complained the ad was racist, Burger King deleted the video and apologized.

In 2018, Burger King's Russia team tweeted an offer of $50,000 and a lifetime supply of Whoppers to "women who get pregnant from world football stars" so the country could inherit "the best football genes." Burger King also deleted the tweet and apologized. And the year before, the same division published an ad with the likeness of a 17-year-old woman who was allegedly raped and beaten at a party.

Tami Kim, an assistant professor of business administration at the University of Virginia, researched the strategy that brands use in advertisement - called identity appeals - to target consumers based on a specific identity. What she and her other Harvard Business School researchers found is that when brands use this strategy to target consumers with a marginalized identity and evoke a stereotype, the ad campaign is more likely to backfire.

In the case of Burger King, Kim said, even though the program that the brand was advertising was to promote female employees, it was unsuccessful because the message relied on the trope of women as domestic housewives. And based on her research, female consumers more often avoid brands that use this kind of advertising, even if the product or initiative being advertised would benefit them.

"Even if they didn't intend to actually offend any woman out there and they have a really good program that they want to market, the damage is already done," Kim said. "At the end of the day, it really doesn't matter what their intent was because it's ultimately up to the consumers to decide."