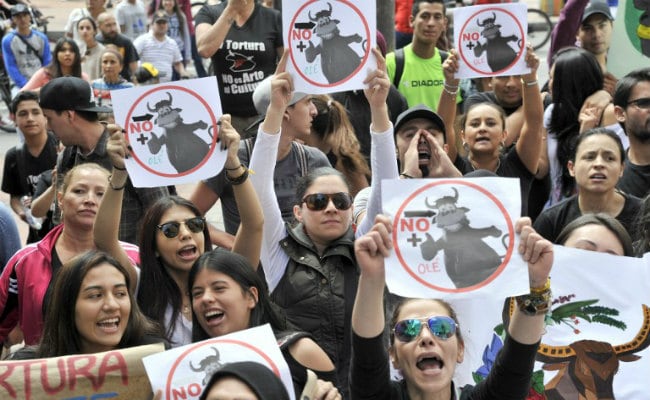 Bogota, Colombia: Hundreds of protesters clashed with riot police and harassed spectators attending a bullfight in Bogota on Sunday as the "fiesta brava" returned to Colombia's capital for the first time in four years.

Police had to fire tear gas to control the protesters, many of whom shouted "murderers" and "torturers" while spitting and sometimes coming to blows with spectators nervously making their way to Bogota's 1930s-era brick bullring.

There were several arrests as tensions ran high in what at times seemed a reflection of deep social divisions between wealthy, well-dressed spectators who had expected a booze-filled, fun afternoon and a crowd of mostly young, angry protesters screaming obscenities at all who passed before them.

"Everyone you see going are old, conservative elites," said David Saitru, a 17-year-old protester dressed in black to mourn what he considered the barbaric killing of the bulls. "My generation thinks differently. We're not prepared to see an animal suffer."

Bogota's previous leftist mayor outlawed bullfighting in 2012. But the constitutional court later overturned the ban, ruling that it was part of Colombia's cultural heritage and couldn't be blocked.

Mayor Enrique Penalosa says that while he sides with animal rights activists who consider the bulls' slow, agonizing death in front of an audience a barbaric throwback, he has no choice but to enforce the high court's ruling.

This week he said he supports legislation working its way through congress to prevent state resources from financing bull fights and leaving it up to each district to decide whether they can take place.

The eight countries where bullfighting still takes place are increasingly putting restrictions on the spectacle, in some cases stipulating the bulls be spared a violent death. In Ecuador, dozens of cities, including the capital Quito, voted to prohibit bullfighting in a 2011 nationwide referendum. A few states in Mexico have also banned the blood sport.

In Spain, where the tradition began, the Constitutional Court reversed in October 2016 an earlier ban on bullfighting in Catalonia passed by the regional parliament. Some promoters are working toward holding the first bullfighting in Barcelona, probably in March.

Bogota's bullring received a major cleanup ahead of Sunday's reopening and organizers say that one of the biggest beneficiaries of this season's six scheduled bullfights is Bogota itself and that for every dollar in profit about a third goes to the city government.

Promoted
Listen to the latest songs, only on JioSaavn.com
"We had a fight for freedom and the right to work, which are pillars of our democracy," Felipe Negret, head of Bogota's Bullfighting Corporation, told El Tiempo newspaper.