A reporter attempted to show Boris Johnson a picture of a boy next to an oxygen mask but he refused to look down at it and put the phone in his pocket.

British Prime Minister Boris Johnson was accused on Monday of grabbing a journalist's phone and putting it into his pocket to avoid looking at an image of a boy sleeping on a hospital floor.

An ITV television reporter attempted to show Johnson the picture -- of a boy next to an oxygen mask -- but Johnson refused to look down at it and put the phone in his pocket.

He eventually looked and said it was a "terrible, terrible photo", apologising to the families.

The state-run National Health Service (NHS) has been one of the major battlegrounds in the run-up to the December 12 election.

Johnson and his team have been involved in a series of high-profile gaffes during the election campaign but still enjoy a comfortable lead in the polls over the opposition Labour party. 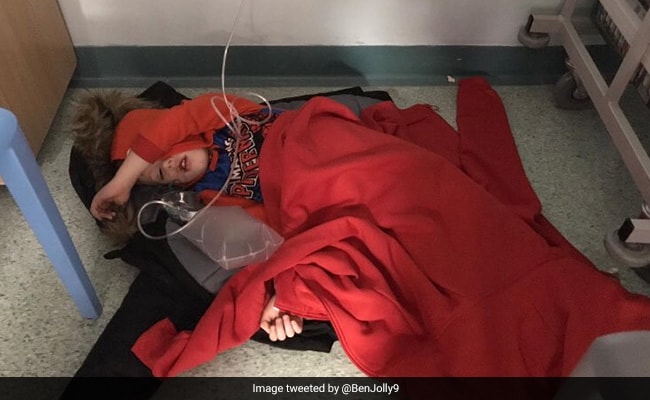 A four-year-old boy was reportedly forced to sleep on a hospital floor because of a lack of beds.

Johnson sought to turn the conversation with the ITV reporter into a positive point for his Conservative government, saying they were "making huge investments into the NHS".

However, Labour leader Jeremy Corbyn said the incident showed that the prime minister "doesn't care", adding: "A child being treated on the floor is a disgrace to our society."

The boy in the picture was eventually diagnosed with flu and tonsillitis and was allowed to be taken home after waiting for several hours in various parts of the hospital in Leeds, northern England.

Both the Conservatives and Labour have promised to increase NHS funding levels.

Opinion poll aggregators suggest the Conservatives are about 10 points ahead of Labour.

(Except for the headline, this story has not been edited by NDTV staff and is published from a syndicated feed.)
Comments
British Prime Minister Boris Johnsonjournalisthospital floor