"The possibility that these two investigations might be linked is clearly a line of enquiry for us," said Neil Basu. 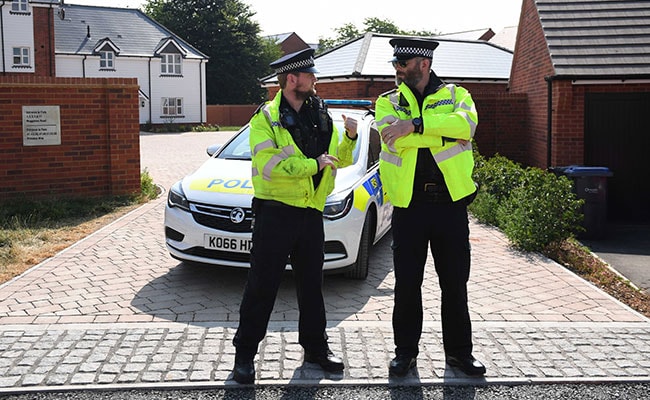 Novichok is a military-grade nerve agent developed by the Soviet Union during the Cold War.(AFP)

British police scrambled on Thursday to determine how a couple were exposed to the same nerve agent used on a former Russian spy earlier this year, leaving them critically ill.

The couple were taken ill on Saturday in the village of Amesbury, close to the city of Salisbury, where former double agent Sergei Skripal and his daughter Yulia were found slumped on a bench on March 4 in an incident that sparked a diplomatic crisis with Russia.

"The possibility that these two investigations might be linked is clearly a line of enquiry for us," said Neil Basu, head of Britain's counter-terrorism police force.

Police announced late Wednesday that tests on the couple, named locally as 44-year-old woman Dawn Sturgess and 45-year-old man Charlie Rowley, revealed they had been exposed to Novichok, but could not say whether it was the same batch used on the Skripals.

Novichok is a military-grade nerve agent developed by the Soviet Union during the Cold War.

The exposure of an apparently random British couple to the nerve agent is spreading fear through the normally quiet city in southwest England once again.

Interior minister Sajid Javid is to chair an emergency cabinet meeting on Thursday, as counter-terrorism police lead the investigation into the incident.

Basu also insisted that there "remains a low risk to the general public," saying "we're satisfied that if anyone was exposed to that level of nerve agent by now they would be showing symptoms."

However, many questions remain over the source of the contamination and why tests were not conducted on the couple until Monday, two days after they were taken ill.

"The priority for the investigation team now is to establish how these two people have come into contact with this nerve agent," Basu said.

"We have no idea what may have contained the nerve agent at this time," he said, urging members of the public not to touch anything if they did not know what it was.

Basu said there was no evidence to suggest that the couple "were targeted in any way".

Local man Sam Hobson, 29, told AFP he was a friend of the pair and had spent time with them as they fell ill.

"I came around Charlie's house in the morning and there were loads of ambulances outside, and his girlfriend was getting taken away," he said.

"She was complaining of a headache in the morning and she went into the bathroom to have a bath and he heard a thump and she was in there having a fit, foam coming out of her mouth."

She was hospitalised at around 0915 GMT, and Hobson then joined Rowley as he went into the village to visit a pharmacy and get food from a church, when Rowley complained of feeling unwell.

"He was sweating loads, dribbling, and you couldn't speak to him," Hobson said.

"He was making funny noises and he was rocking backwards and forwards and there was no response from him, he didn't even know I was there. It's like he was in another world, hallucinating."

Hobson said he called the ambulance at around 1430 GMT.

Hobson also said that the couple had visited Salisbury on Friday, speculating that "they must have touched something that was contaminated."

Basu said there was no evidence the man and the woman had "recently visited any of the sites that were decontaminated" after the poisoning of the Skripals.

Police had initially assumed that the two had consumed contaminated drugs.

But samples from both patients were sent to Porton Down defence laboratory on Monday "due to concern over the symptoms," Basu said.

Both are still in a critical condition and are at Salisbury District Hospital -- the same facility where the Skripals were treated.

Police launched two helplines for those worried about possible contamination.

Police called for calm but also said that anyone who had visited any of the five sites that the man and the woman went to on Friday and Saturday should wash clothing worn at the time and wipe down personal items.

The sites, which have now been cordoned off, are a park and a homeless hostel in Salisbury, as well as a pharmacy, church and the house in Amesbury.

Chemistry professor Andrea Sella said that nerve agents like Novichok were "designed to be quite persistent", suggesting it was possible the couple had come into contact with the original batch.

"It is so strange, it is such a quiet place," she said, adding that the emergency services personnel were wearing protective suits.

Skripal, 67, and his 33-year-old daughter Yulia, who was visiting from Moscow, were treated for an extended period of time before being released from hospital.

The police said they suspected the nerve agent may have been smeared on a front door handle in liquid form.

Moscow has rejected British accusations of involvement in the Skripal poisoning, which sparked a diplomatic crisis that saw Russia and the West expelling dozens of diplomats in tit-for-tat moves.

(This story has not been edited by NDTV staff and is auto-generated from a syndicated feed.)
Comments
British PoliceDawn SturgessCharlie Rowley