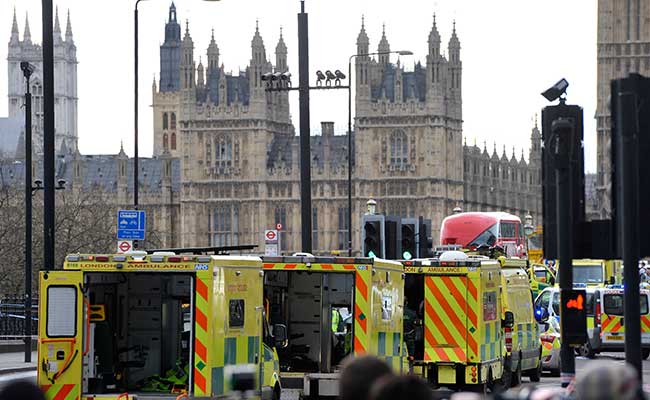 London: ISIS said Thursday one of its "soldiers" carried out the deadly rampage at the British parliament, as Prime Minister Theresa May vowed the nation would not be cowed by its deadliest attack in 12 years. Police identified the assailant as 52-year-old Khalid Masood, a British-born man with a string of previous convictions but who was not subject to a current investigation.The ISIS claim came after armed police arrested eight people in raids linked to Wednesday's attack that left three people dead and sowed panic in the heart of London.

"An act of terrorism tried to silence our democracy," May told a packed House of Commons, which stood for a minute's silence in remembrance of the victims of the strike on the very symbol of British democracy.

"We are not afraid and our resolve will never waver in the face of terrorism."

Just hours after she spoke, Belgian police arrested a man as he tried to drive into a crowd at high speed in a shopping area in the port city of Antwerp.

That was the third incident in a week in Europe after London and a weekend attack at Paris's Orly airport, and came a day after the first anniversary of the Brussels suicide bombings that killed 32 people and were also claimed by ISIS.

ISIS said it was responsible for the London murders, according to the Amaq propaganda agency, the first time the terrorist have claimed an attack on British soil.

"The perpetrator of yesterday's attack in front of the British parliament was a soldier of the Islamic State (ISIS) and the operation was carried out in response to calls to target coalition countries," Amaq said citing a "security source."

Police in London said there was "no prior intelligence about his intent to mount a terrorist attack."

Britain is a member of the US-led coalition fighting ISIS in Iraq and Syria that the terrorist group has urged its followers to target.

The latest attack carried echoes of the atrocities in Nice and Berlin when trucks ploughed into crowds of people, killing 86 people in the French Riviera city in July and 12 at a market in the German capital just days before Christmas.

As the British flag over parliament flew at half-mast, lawmakers returned to "business as usual" in the surreal silence of an area in the heart of London normally thronged with tourists.

Hundreds of extra police were on patrol as officers worked around the clock to piece together what happened in the deadliest attack in Britain since four suicide bombers killed 52 people on London's transport system in July 2005.

The UN Security Council also observed a minute of silence Thursday in honour of those killed, as Britain's allies vowed to stand by London in the fight against terrorism.

Wednesday's attacker mowed down pedestrians with a car along Westminster Bridge -- a busy traffic route and popular tourist spot with views of parliament and the Big Ben clock tower.

He then rammed the railings outside parliament and jumped out of the car, fatally stabbing a police officer before being shot dead.

The unarmed officer, 48-year-old Keith Palmer, was hailed as a hero by May after he died despite frantic efforts to save him.

The other victims were a 43-year-old British woman and an American in his 50s, while 29 people were treated in hospital including French school children and foreign tourists.

May said the attacker had been a "peripheral figure" investigated over concerns about violent extremism.

Pictures believed to be of the knifeman lying on a stretcher showed a burly man with black clothes and a beard.

"It is still our belief... that this attacker acted alone yesterday and was inspired by international terrorism," he said.

In Birmingham, which is home to large South Asian and Muslim communities, Muhammad Afzal, the head of the central mosque, said the attacker's motivations had nothing to do with true Islam.

Rowley acknowledged that Muslim communities will "feel anxious" over fears of an Islamophobic backlash, and said police would work with community leaders to ensure protection.

'On way to collect children'

Britain's last terror attack was the 2016 assassination of MP Jo Cox by a pro-Nazi sympathiser shortly before the historic but deeply divisive vote to leave the EU.

Scotland, where there is a fresh push for independence following Brexit, delayed a parliamentary debate on a new referendum until Tuesday, the day before Britain is to trigger the Article 50 two-year EU divorce process.

A Spanish diplomatic source confirmed that one of the dead was 43-year-old British citizen Aysha Frade, whose mother was Spanish.

Promoted
Listen to the latest songs, only on JioSaavn.com
Media reports said she was on her way to pick up her two daughters, aged seven and nine, from school.

Kurt Cochran from the United States was named as the third victim by President Donald Trump, who called him a "great American".