After his tweet raised the hackles of locals, Toby Fisher apologised for calling the fountain "crappiest ever". "I meant 'classiest'," he said. 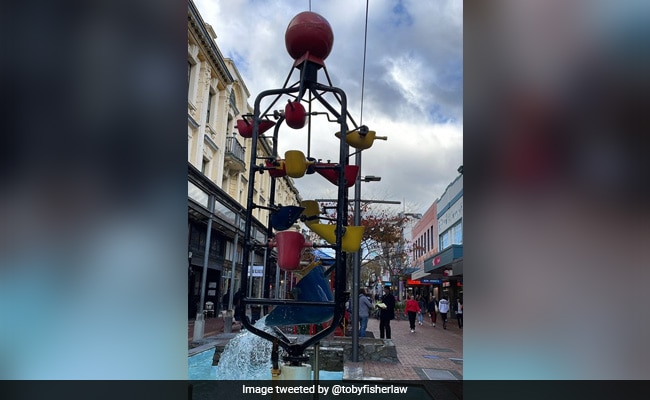 British high commissioner to NZ has distanced herself from her husband's comments.

A British envoy's husband in New Zealand recently mocked the country's beloved Wellignton bucket fountain, a well-known and polarising water feature that graces the centre of the nation's capital.

Taking to Twitter, Toby Fisher, the husband of British high commissioner to New Zealand Laura Clarke, called the installation the "crappiest fountain ever".

After 4 years in Wellington, it's time to be straight with you all: this is the crappiest fountain ever. Don't @ me. pic.twitter.com/MLsXofgm5J

Following his social media post, his wife, Ms Clarke, distanced herself from his comments. She quickly joined in to say that her husband's opinion in no way represents her views or the position of the British government. "The bucket fountain is a well-loved part of Wellington's heritage," she added.

As British High Commissioner to NZ I'd like to be clear that the opinions of my husband @tobyfisherlaw in no way represent my views, or the position of the British Government.

The bucket fountain is a well-loved part of Wellington's heritage. https://t.co/pXL96CX7UV

The fountain was installed in October 1969 and was originally called a "water mobile". It dumps an erratic stream of water through its buckets, spilling and splashing a large portion of water outside the fountain and onto pedestrians and onlookers on windy days.

The fountain also has its staunch defenders. "Was visiting on Tuesday. Grew up playing around that fountain. You don't have the inner child's want of a simpler time," said one Twitter user.

Another, on the other hand, agreed with Mr Fisher and said, "I don't even know why that weird thing is mentioned in travel guides. I was hugely disappointed when I first saw it. It's simply ugly and when you pass by you very often get a bit wet when you try to social distance from other people on Cuba Street."

After his tweet raised the hackles of locals, Mr Fisher apologised as well for calling the fountain "crappiest ever". In the following tweet, he wrote, "I'm aware this tweet has given rise to significant consternation amongst the Wellington community. I apologise. I misspoke. This was an auto-correct error. I meant 'classiest',"

Meanwhile, Mr Fisher's statement is only the most recent in a long history of controversy surrounding the bucket fountain. According to the Independent, actor Elijah Wood famously urinated in the fountain while in New Zealand filming the 'Lord Of The Rings'. Several people have also reportedly spoken about its "sheer ugliness" and complained about its frustrating engineering.