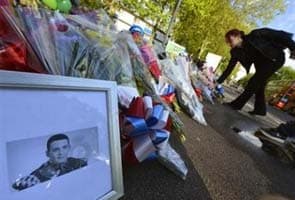 London: The British government, facing criticism over the killing of a soldier by suspected Islamists in a London street, is to set up a new group to combat radical Muslim preachers and others whose words could encourage violence.

"It will assess the range of strategies to disrupt individuals who may be influential in fostering extremism. It needs to confront those religious leaders who promote violence head on," it said in a statement.

The killing of soldier Lee Rigby, hacked to death near his London barracks on Wednesday, fuelled public anger about radical Islam. It has also raised questions over whether more could have done more to prevent the attack and put pressure on Cameron to tackle suspected militants more forcefully.

Witnesses said the soldier's killers shouted Islamist slogans during the attack. Bystanders filmed one of the suspects saying it was in revenge for Britain's involvement in the wars in Iraq and Afghanistan.

Michael Adebolajo, 28 and Michael Adebowale, 22, are under guard in hospital after being shot and arrested on suspicion of murder. Media reports said Adebolajo handed out extremist literature and made "rambling and intense" street lectures.

Home Secretary (interior minister) Theresa May said thousands were at risk of being radicalised.

"You have people who are at different points on what could be a path to violent extremism," May told the BBC. "We need to look at the laws."

Opposition Labour lawmaker Hazel Blears said people vulnerable to radicals were spotted too late and government cuts had weakened the fight against them. She told the Observer newspaper the government had "abandoned the territory".

Former British prime minister Tony Blair tried to tighten rules against hate preachers after the London bombings in 2005 that killed 52 commuters. The measures stirred a long debate about how to balance free speech and civil rights with a strong counter-terrorism strategy.

Religious campaign group Faith Matters said Rigby's death had led to a big rise in reports of attacks on Muslims.

Up to 2,000 people attended a demonstration in Newcastle, northern England, organised by the far-right English Defence League on Saturday. Demonstrators shouted "RIP Lee Rigby" and "Whose streets? Our streets?"

Three more men were arrested on Saturday on suspicion of conspiracy to murder. Asked whether the suspects were "lone wolves" or part of a wider group, May said signs suggested they were acting alone.

A parliamentary committee is examining the security services' handling of the case. Security sources said the two suspects were known to them but were not seen as a serious threat.

A friend of Adebolajo made unsubstantiated claims on the BBC on Friday that intelligence officers tried to recruit the suspect six months ago.

Asked whether the security services had contacted the men, May told the BBC: "Their job is about gathering intelligence. They do that from a variety of sources and they will do that in a variety of ways. And yes, they will approach individuals from time to time."

Promoted
Listen to the latest songs, only on JioSaavn.com
French police were investigating whether the stabbing of a soldier patrolling west of Paris on Saturday was a copycat crime.