UK Election Results 2019: If the exit poll results hold when actual ballots are tallied, Britain PM Boris Johnson and his Conservative Party will have achieved a smashing success.

Prime Minister Boris Johnson appears to have won a sweeping, decisive and powerful majority of parliamentary seats in Thursday's election, according to the respected national exit poll released minutes after the voting ended.

The Conservative Party is expected to win 368 spots in a 650-seat Parliament, according to the exit poll. The party needs 322 seats to control the House of Commons - and then full speed ahead with Brexit.

If the poll results hold when actual ballots are tallied overnight, Johnson and his Conservative Party will have achieved a smashing success, the largest win for the Tories since the days of Margaret Thatcher - while the opposition Labour Party and its hard-left leader, Jeremy Corbyn, will have suffered their worst defeat in four decades.

It is possible now that if Johnson serves a full five-year term, the Conservatives will have been in power from 2010 until 2024.

If the ballot tallies follow the exit poll, then Johnson - the bombastic showman who led the campaign to leave the European Union in the June 2016 referendum - will be the prime minister to see Britain set sail away from Europe next month.

And dreams of a second referendum - of remaining in the EU - will be dashed.

The exit poll was conducted for a consortium of Britain's major TV broadcasters - the BBC, ITV, Sky - by opinion research firm Ipsos Mori, which conducted tens of thousands of face-to-face interviews at 144 of the country's 50,000 polling stations on Thursday. In the past three elections, the exit survey has been very accurate overall. 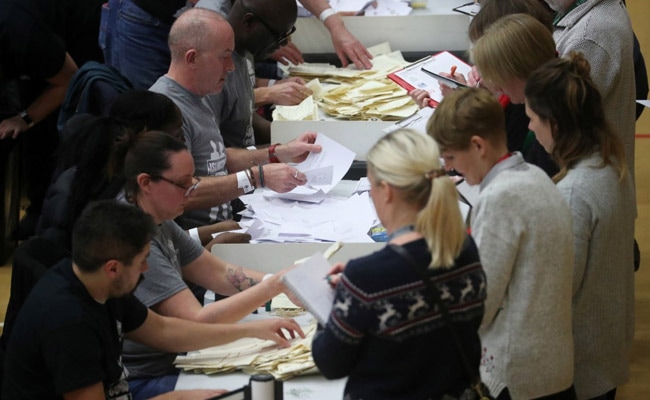 In after-hours trading, the pound sterling surged 2 percent on the news.

John Bercow, the former speaker of the House of Commons known for shouting "orrrrder," assessed, "It was a Brexit-focused, Brexit-oriented, Brexit-dominated campaign."

Bercow told Sky News that with such a large parliamentary majority, Johnson could count on making the first stage of Brexit happen. "But that's the withdrawal agreement," said Bercow, a former Conservative lawmaker. "That is about the divorce bill; it's about the rights of European citizens. It's about the Irish border. I don't think, if I may say so, that means getting Brexit done in the sense that it's gift-wrapped or oven-ready for Christmas."

Britain would enter into a year-long transition period and begin to engage in talks over a free-trade agreement and a host of other vexing issues with its former partners in the continental bloc - such as trade, intelligence sharing and the movement of capital.

Bercow predicted Britain would be debating Brexit for the next five, 10, possibly 15 years.

This was Britain's third general election in a little more than four years, and the second since the June 2016 Brexit referendum. According to the surplus of opinion surveys and interviews, people are as hopelessly divided over the EU as they were when they voted 52 percent to 48 percent to leave.

Sara Hobolt, a political scientist at the London School of Economics, said the "genius of Boris Johnson" was that he united those who wanted Brexit behind him, while "the remain vote is much more split."

Reactions from Corbyn's party were gloomy. Labour lawmaker Barry Gardiner called exit polls "obviously a devastating result for us." He told Sky News: "And as the night goes on, we'll know whether it's as bad as it says or not. It's a deeply depressing prediction."

"It feels like a punch in the stomach," Labour lawmaker Jess Phillips tweeted.

Labour members were already arguing who or what was to blame for a possible Tory landslide. Some on the left said it was Brexit, not Corbyn himself or the party's transformative socialist agenda, that buried them. Others said Corbyn wasn't popular and that Labour's agenda was too radical.

Either way, Corbyn is expected to face pressure to step down.

Tim Bale, a politics professor at Queen Mary, University of London, said Labour has "a lot of very hard thinking to do, particularly with the leader it now chooses."

He said that if the party selected its next leader in Corbyn's image, it would be in "trouble."

Under Corbyn, the party swung hard to the left, calling for the nationalization of rail, mail, water and electricity, also pushing for a four-day workweek and free university tuition, and heavy taxes on corporations and the wealthy.

While Brexit was dominant in many voters' minds on Thursday, it wasn't the only issue.

Sarah Duncan, 71, a historian and lifelong Conservative voter, was up early to her London polling station, not far from the River Thames. She said this election "was particularly important, because I'm very frightened of far-left-wing government and what Jeremy Corbyn could do for this country."

Duncan confessed in the June 2016 referendum, "I voted to stay, I didn't vote for Brexit, but I do feel that because the country has voted for Brexit, it's a democratic country, and we should do what the majority said and we should leave, and that's what Boris has stood for." As a leader, she said, "he hasn't had a chance to prove himself yet. We will wait and see."

Nick Symes, 53, a yacht broker, standing in the rain, said he voted for the Labour Party because "it's socialist, it's why I like it, it's redistributive, and it's not Boris Johnson."

Josh Hawketts, 27, an underwriter, voted Labour in his constituency in Battersea, southwest London. Standing outside a polling station just before sunrise, he explained that his vote was "not for Corbyn or anything like that, it was purely tactical. Just anti-Tory, basically."

In Brussels, EU leaders who had gathered for a previously planned summit were preparing for a late night of election results-watching. Several said they just wanted to get Brexit over with.

Perhaps surprisingly, more than one top diplomat said they were hoping for a robust majority for the eventual victor - and not a hung parliament, as many British remainers want.

"The best thing for Ireland, for the U.K. and for Europe would be an end to the uncertainty. So whether that's Prime Minister Johnson winning with a large majority or the 'Remain' parties together winning a majority, we will work with whatever the outcome is," Irish Prime Minister Leo Varadkar told reporters in Brussels. "What's been very hard to work with is a Parliament that was a hung Parliament, that wasn't able to come to a majority decision on anything. I just hope we are not in that position again tomorrow."

Privately, some diplomats who work on Brexit said that if pro-Brexit Johnson won a sweeping majority, the end result, paradoxically, could be a Britain that winds up more closely aligned with the EU than if he has weak control over Parliament. A big majority, the diplomats reasoned, would give Johnson more flexibility to make compromises during what is likely to be a year of lightning-fast negotiations on a trade deal. If Johnson had only a few votes to spare, he could be more vulnerable to be taken hostage by Brexit hard-liners who insist on the sharpest possible split from Europe.

(Except for the headline, this story has not been edited by NDTV staff and is published from a syndicated feed.)
Comments
Boris JohnsonUK ElectionsBrexit