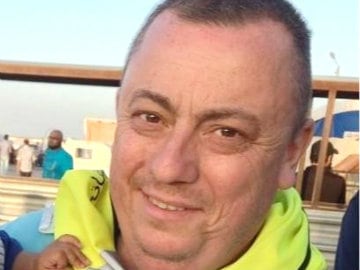 British aid worker David Haines has been beheaded - like two American journalists before him - and the Islamic State group is threatening to kill a fourth captive.

A grisly video released by the group showing Haines' body both mocks the West and raises the pressure on Western leaders. It concludes with a death threat against British hostage Alan Henning, shown in the same kind of orange jumpsuit the other three were wearing when they were killed.

Prime Minister David Cameron praised the 44-year-old Haines on Sunday as a British hero, and his family asked that he be remembered for devoting his life to helping civilians caught in deadly conflicts.

Haines is the third Westerner beheaded in recent weeks by the Islamic State group, which has seized large parts of Syria and Iraq and, according to Cameron, poses a "massive" threat to the rest of the Middle East.

"They are killing and slaughtering thousands of people - Christians, Muslims, minorities across Iraq and Syria," Cameron said after an emergency meeting with military and security chiefs.

"They boast of their brutality. They claim to do this in the name of Islam. That is nonsense. Islam is a religion of peace. They are not Muslims, they are monsters," he said.

Cameron said the group is planning attacks against Britain and the rest of Europe, and that Britain has to step up its counterterrorism efforts.

Britain will support U.S. military efforts against the Islamic State group by using British forces to help with logistics and intelligence gathering, he said, but will not send ground troops.

Cameron also raised the prospect that the black-clad, knife wielding Islamic State extremist on the video - who speaks with an East London accent - may in fact be a British man who has joined the terrorists.

The tall, masked figure in the video appears to be the same man who appeared in earlier videos announcing the killings of Americans James Foley and Steven Sotloff.

The video opens with footage of Cameron condemning the Islamic State group. The man with the knife then appears and condemns Britain's support of U.S. action against the group and says the captive must pay with his life.

The Islamic State group's videos have all followed a similar script, with the extremist dressed in black - only his eyes visible - and the victim dressed in an orange jumpsuit. They are in a desert landscape with no obvious identifying landmarks.

Each has also included a threat against another captive briefly shown on camera.

Britain's Foreign Office initially asked the press not to identify Henning as the captive shown on camera, but it dropped this request Sunday with his family's approval. The family also distributed a photo of Henning.

The death of Haines expands the group's on-camera victims beyond journalists to include international aid workers.

"He helped whoever needed help, regardless of race, creed or religion," he said.

David Haines was kidnapped in Syria in March 2013 while working for the French aid group Agency for Technical Cooperation and Development, or ACTED, to help victims of the fighting.

He had also worked for groups such as Handicap International, which helps the disabled during conflicts, and Nonviolent Peaceforce, which sends unarmed peacekeepers into conflict zones. He had previously been in Libya during its civil war, as well as South Sudan.

Frederic Roussel, head of development for ACTED, said the group is carefully assessing the security of its staff in different countries. It already has told its international staff not to go into Syria because of the danger.

Mike Haines said his brother had also worked for the United Nations in the Balkans "helping people in real need."

The leader of Bosnia's Islamic Community, Husein Kavazovic, urged fellow Muslims to "show resolve to stop the murderers." He said Haines' family can be proud of his legacy.

Haines had a teenage daughter in Scotland from a previous marriage and a 4-year-old daughter in Croatia with his current wife, Dragana.

British officials kept news of Haines' abduction out of the public eye for security reasons until the Islamic State group showed him in a video nearly two weeks ago.

His family members had pleaded with his captors Friday to contact them. The family said the extremists had ignored earlier attempts to open communications.

British officials had said they were doing everything possible to protect Haines. An earlier rescue bid led by U.S. forces had failed, however, and it is not clear if Western agencies know the precise location of the captors.

The U.N. Security Council issued a press statement strongly condemning "the heinous and cowardly murder" of Haines, calling it "a tragic reminder of the increasing dangers humanitarian personnel face every day in Syria."

"It also once again demonstrates the brutality of ISIL, which is responsible for thousands of abuses against the Syrian and Iraqi people," it said.

France, which is holding an international conference Monday to combat the Islamic State group, condemned Haines' killing, as did Germany, Spain, Italy and others.

"The odious assassination of David Haines shows once more the need for the international community to mobilize against the base and cowardly Daesh," French President Francois Hollande said, using the group's Arabic acronym.

There needs to be "internationally agreed action to effectively stop the flow of fighters and money," he said.

Promoted
Listen to the latest songs, only on JioSaavn.com
Australian Prime Minister Tony Abbott said his country is preparing to contribute 600 troops and up to 10 military aircraft to the campaign against the Islamic State extremists. Abbott said Australia was responding to a formal request from the United States for specific contributions to the international coalition.