They exchanged views on major global and regional issues on the UN agenda in the political, security, economic, financial and sustainable development spheres, as well as on intra-BRICS activities. 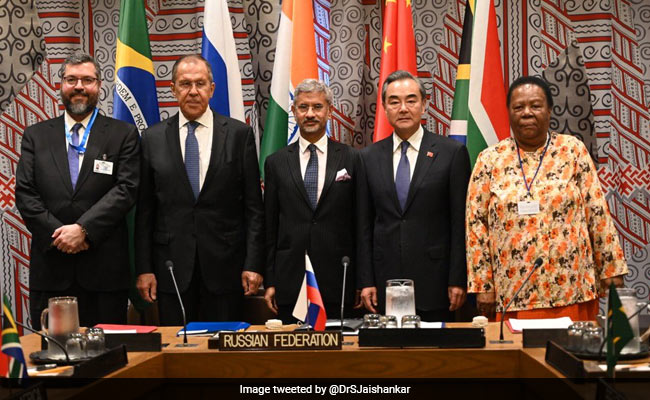 Strongly condemning terrorism in all its forms, the BRICS nations of Brazil, Russia, India, China and South Africa called for the need for an early adoption of a Comprehensive Convention on International Terrorism (CCIT).

The BRICS Ministers of Foreign Affairs/International Relations held their annual meeting on the margins of the 74th session of the United Nations General Assembly on Thursday. The meeting was chaired by Russia in the country's capacity as the incoming BRICS Chair for 2020.

"The ministers reiterated their strong condemnation of terrorism in all its forms and manifestations whenever, wherever and by whomsoever committed. They expressed their conviction that a comprehensive approach is necessary to ensure an effective fight against terrorism," an official statement issued in New York said.

The ministers urged the need for concerted efforts to counter terrorism in accordance with the international law and under UN auspices, and stressed in this regard "the need for early adoption of a Comprehensive Convention on International Terrorism (CCIT)."

They exchanged views on major global and regional issues on the UN agenda in the political, security, economic, financial and sustainable development spheres, as well as on intra-BRICS activities.

They underscored that the participation of BRICS countries in the work of the UN Security Council, including South Africa as an elected member for the period 2019-2020, is a valuable opportunity to maintain constant dialogue and facilitate cooperation on issues of peace and security.

The ministers reiterated their commitment to transparent, non-discriminatory, open, free and inclusive international trade and noted that protectionism and unilateralism run counter to the rules and the spirit of the World Trade Organization.

They urged all states to refrain from promulgating and applying any economic, financial or trade measures not in accordance with the rules of the WTO, international law and the Charter of the United Nations that impede the full achievement of economic and social development, particularly in developing countries.

They expressed their concern over continued conflicts in several regions around the globe, which undermine international security and stability. They reaffirmed their commitment to peaceful solutions through political means and diplomatic engagement.

They further commended the African Union's commitment to "Silencing the Guns by 2020" and reiterated support for efforts to strengthen the African Peace and Security Architecture.

Recalling that 2020 is the 75th anniversary of the founding of the United Nations and of the end of the Second World War, the ministers reaffirmed support to efforts towards making global governance more inclusive, representative and participatory with greater participation of emerging markets and developing countries in global decision-making.

They also reaffirmed the need for a comprehensive reform of the UN, including its Security Council, with a view to making it more representative, effective and efficient, and to increase the representation of the developing countries so that it can adequately respond to global challenges.

"China and Russia reiterated the importance they attach to the status and role of Brazil, India and South Africa in international affairs and support their aspiration to play a greater role in the UN," the statement said.

They also stressed the need for more effective international action on climate change, reaffirmed the commitment of BRICS countries to the full implementation of the Paris Agreement, adopted under the principles of the United Nations Framework Convention on Climate Change, including the principles of common but differentiated responsibilities and respective capabilities, in the light of different national circumstances.

They urged developed countries to support developing countries, including through honouring their financial commitments and the transfer of technology, which are the most critical enablers for climate action.

The ministers reaffirmed their commitment to multilateralism and to the multilateral trading system with the WTO at its centre. They reiterated the urgent need to strengthen and reform the multilateral system, including the UN, the WTO, the IMF, and other international organisations.