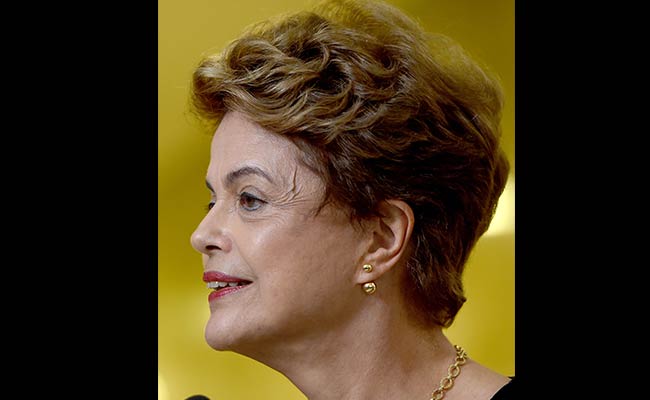 Braslia: Brazilian President Dilma Rousseff was left fighting for political life today after her vice president, leader of the main party in the coalition government, indicated he may side with opponents in the battle over her impeachment.

Backroom dealing intensified in the capital Brasilia with Congress expected to complete the formation today of the special commission that will recommend pursuing or rejecting the case against Rousseff.

The commission will then hear from Rousseff. She is accused of illegal budgeting maneuvers, but says the practices were long accepted by previous governments and that the attempt to bring her down is a "coup."

On paper, Rousseff has the numbers between her Workers' Party and main coalition ally PMDB to survive an impeachment vote when the commission sends the case to the full lower house of Congress.

However, those calculations were thrown into doubt with the publication overnight of an angry letter from PMDB leader and Vice President Michel Temer in which he all but announced their political divorce.

Temer told the president that during her first term in office starting in 2011 he was reduced to a "decorative" role and that she has shown an "absolute lack of confidence" in him.

The letter stops short of declaring support for her impeachment, but neither does Temer give his backing, strongly indicating that the PMDB is eying a split. If Rousseff is forced from office, Temer would become interim president.

The turmoil has alarmed markets in the world's seventh biggest economy, which is already suffering from recession and a huge corruption scandal centered on state oil company Petrobras.

Andre Perfeito, chief economist at Gradual Investimentos, said the "climate of war" suggested that "the impeachment process will drag out for longer than initially thought."

"In the letter divulged yesterday by Vice President Michel Temer, we clearly see that there is not much more room for cooperation" with Rousseff.

Although Rousseff has given no public reaction, Globo newspaper columnist Gerson Camarotti said "the government's interpretation is that the letter was a declaration of a split."

Temer's office insisted, however, he was not breaking with the government but rather "defending the reunification of the country," according to Globo.

As recently as Monday the president had said she believed Temer would stand by her.

To defeat impeachment, Rousseff needs more than one third of votes in the lower house, which will consider the case after the commission makes its recommendation. If the house did vote for impeachment, the Senate would then hold a trial, with a verdict to impeach needing two thirds of support.

Only a year into her second term and with popularity ratings of barely 10 percent, Rousseff has come out swinging since months of impeachment rhetoric in Congress ended with the launching of the process last week.

She called on Congress to speed up proceedings and to scrap the annual holidays that run from December 23 through to February when the carnivals are held.

Brazil, host of the 2016 Rio Olympics, is in a deep gloom, with GDP down 4.5 percent in the third quarter year-on-year, and the national currency down a third against the dollar this year.

Rousseff is also tainted by the Petrobras scandal, which has sucked in leading politicians and business figures, exposing the depth of corruption at the highest levels in Brazil.

Even though Rousseff herself has not been linked to any Petrobras-related crimes, the saga is adding to the sense of drift that has plagued her second term.

Some experts believe Rousseff is being tried for political reasons, as punishment for having presided over a general decline, rather than the arguably technical crimes of accounting malpractice.