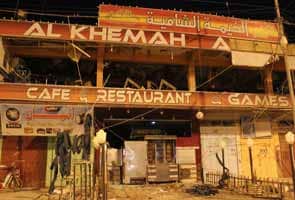 Baquba, Iraq: Bombs targeting Sunnis, including two near a mosque and one at a funeral procession, killed 67 people in Iraq on Friday, officials said, after dozens died in two days of attacks on Shiites.

The violence raises the spectre of tit-for-tat killings common during the height of sectarian bloodletting in Iraq that killed tens of thousands of people, and comes at a time of simmering tension between the Sunni minority and Shiite majority.

One bomb exploded as worshippers were leaving Saria mosque in the city of Baquba, north of Baghdad, while a second detonated after people gathered at the scene of the first blast, killing a total of 41 people and wounding 57, police and a doctor said.

"Authorities should stop these daily explosions and car bombs against innocent people," Abbas al-Zaidi, 47, said near the scene of the blasts.

Security forces cordoned off the area and the main hospital in Baquba, an AFP journalist said, as a string of ambulances brought victims in.

Police and soldiers also helped transport the wounded and dead.

Two roadside bombs exploded in a Sunni-majority area of west Baghdad on Friday evening, killing at least 14 people and wounding 35, while two more bombings in another Sunni area in the capital's south killed two people and wounded seven, security and medical officials said.

In Madain, south of Baghdad, a roadside bomb exploded near a funeral procession for a Sunni man, killing eight people and wounding at least 25 others, security and medical officials said.

And a bomb in a coffee shop in the Sunni city of Fallujah, west of Baghdad, killed two people and wounded 12.

In the north on Friday, gunmen killed a government employee and one of his relatives in the city of Kirkuk, and a provincial elections candidate in Mosul, police and doctors said.

With the latest attacks, more than 255 people have been killed in violence so far in May, according to AFP figures based on security and medical sources.

On Thursday, a suicide bomber killed 12 people at the entrance of Al-Zahraa husseiniyah, a Shiite place of worship in Kirkuk, where relatives of victims from violence the day before were receiving condolences.

Car bombings in three Shiite-majority areas of Baghdad on Thursday killed 10 people, while 21 people died in a spate of bombings that mainly hit Shiite areas of the city the previous day.

Gunmen also shot dead the brother of a Sunni MP in Baghdad on Thursday.

"It is the responsibility of all leaders to stop the bloodshed in this country and to protect their citizens," he said in a statement. "Small children are burned alive in cars. Worshippers are cut down outside their own mosques. This is beyond unacceptable."

Tensions are festering between the government of Prime Minister Nuri al-Maliki, a Shiite, and members of the Sunni minority who accuse authorities of targeting their community, including through wrongful detentions and accusations of involvement in terrorism.

Protests broke out in Sunni areas of Iraq almost five months ago.

While the government has made some concessions, such as freeing prisoners and raising the salaries of Sunni anti-Al-Qaeda fighters, underlying issues have not been addressed.

On April 23, security forces moved on protesters near the town of Hawijah in Kirkuk province, sparking clashes that killed 53 people.

Promoted
Listen to the latest songs, only on JioSaavn.com
Dozens more died in subsequent unrest that included revenge attacks on security forces, raising fears of a return to the all-out sectarian conflict that ravaged Iraq from 2006 to 2008.

Violence has fallen from its peak during those years, but attacks are still common, killing more than 200 people in each of the first five months of this year, according to AFP figures.