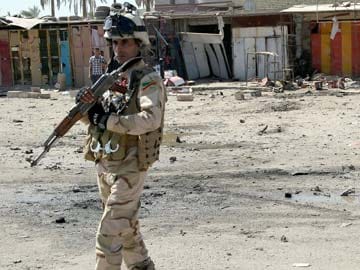 Baghdad: At least 17 people, most of them Shi'ite Muslims, were killed in a wave of bombings and shootings across Iraq on Saturday ahead of a major Shi'ite ritual, medical and police sources said.

The deadliest of the attacks took place in Baghdad's mainly Shi'ite district of Bayaa when a car bomb blew up near a gathering of Shi'ite pilgrims, killing seven people and wounding another 16, police and medics said.

Three people were killed and ten wounded in a mainly Shi'ite district on the southeastern outskirts of Baghdad when a roadside bomb exploded in a vegetable market, police said.

In the district of Husseiniya, a bomb left inside a restaurant killed two people and wounded another five, police said.

No group immediately claimed responsibility for the attacks, which came a few days before Arbae'en, a holy ritual in which Shi'ites commemorate the death of Imam Hussein, grandson of Prophet Mohammad.

Iraqi security services have been on high alert since last week as they expect more attacks targeting Shi'ite communities in the coming days.

Shi'ites are considered apostates by hardline Sunni Islamist insurgents who have been regaining momentum in Iraq this year. On Friday, masked gunmen killed 18 people, most of them Iranians, working on a gas pipeline outside the northeastern Iraqi town of Muqdadiya.

In other violence on Saturday, gunmen ambushed a military vehicle and shot dead three soldiers in western Tikrit, 150 km (95 miles) north of Baghdad, police said. Two more soldiers were shot dead when gunmen opened fire at a checkpoint east of the Iraqi capital.

Iraqi authorities blame al Qaeda for the rise in violence in the country, saying it is trying to destabilise the Shi'ite-led government and foment intercommunal conflict.

Insurgent attacks in Iraq have risen since the start of the year, with hundreds killed each month. The growing violence has raised fears of a return to the heights of bloodshed seen in 2006-7, when tens of thousands died.

Iraq's sectarian balance has come under further pressure from the civil war in neighbouring Syria, where mainly Sunni rebels are fighting to topple a leader backed by Shi'ite Iran.

Promoted
Listen to the latest songs, only on JioSaavn.com
So far Shi'ite militias, most of which disarmed in recent years and joined the reconstituted security forces or entered the political process, have largely held their fire.

But a worsening Sunni insurgency could prompt Shi'ite militia to again take up arms.
© Thomson Reuters 2013