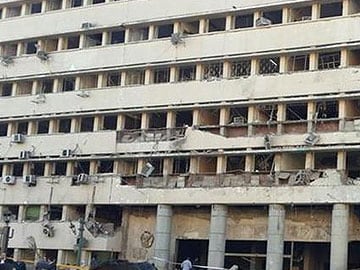 Police officers and people gather in front of the destroyed Islamic Museum building, after a bomb blast occurred at the police headquarters nearby, in downtown Cairo on Friday.

Cairo: A bomb exploded near a police academy in Cairo on Saturday, wounding one person, security sources said.

The explosion, which occurred on the third anniversary of the uprising that toppled autocrat Hosni Mubarak, came a day after a wave of bomb attacks targeting police killed six people and raised fears that an Islamic insurgency is gaining momentum.

Islamist militants have stepped up attacks since the army toppled President Mohamed Morsi of the Muslim Brotherhood in July. Hundreds of security forces have been killed.

Promoted
Listen to the latest songs, only on JioSaavn.com
Morsi's overthrow plunged Egypt into political turmoil which has hit investment and tourism hard.

More violence is expected on Saturday, when rival political factions gather to mark the anniversary of Mubarak's downfall.
© Thomson Reuters 2014