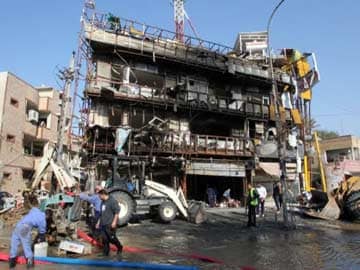 Municipality workers clean the area in the aftermath of an explosion in the Karrada commercial district in Baghdad.

Hilla: Bombs exploded in predominantly Shi'ite Muslim districts of the Iraqi capital and in the southern city of Hilla on Tuesday, killing at least 49 people, police and hospital sources said.

No group immediately claimed responsibility for any of the attacks, but Shi'ites are often targeted by Sunni Islamist insurgents who have been regaining ground in Iraq over the past year and overran several towns in recent weeks.

The deadliest attacks on Tuesday occurred in and around Hilla, 100 km (60 miles) south of Baghdad, where 35 people were killed in seven car bomb explosions inside the city itself and in the nearby towns of Haswa, Mahaweel and Mussayab.

"Hilla hospital has received 35 bodies so far from seven car bomb blasts," said one health official. A further 90 people were wounded in the blasts. Fourteen more people were killed in explosions in mainly Shi'ite districts of Baghdad.

Promoted
Listen to the latest songs, only on JioSaavn.com
In one of those, a bomb inside a parked vehicle exploded near a bus station in the Bayaa district, killing five people, the sources said. There were also blasts in the Amil, Ilam and Shurta districts.