The Boeing Starliner capsule will hit speeds as high as 25 times the speed of sound as it plummets through the atmosphere, and its heat shield will have to withstand 3,000-degree temperatures that will ignite a fireball around the capsule. 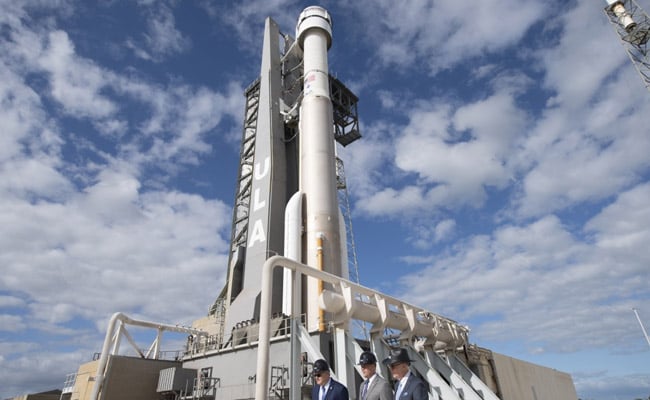 The Boeing spacecraft that ran into trouble almost immediately after being launched into space Friday, forcing it to abort the main part of its test mission, now faces another daunting task: flying back to Earth.

Having missed the orbit that would have allowed it to dock with the International Space Station, the Starliner spacecraft, which has no astronauts on board, now is scheduled to come screaming back to earth to a landing in the New Mexico desert at 7:57 a.m. Eastern time Sunday, a week earlier than originally planned.

During a press call Saturday afternoon, Boeing and NASA officials expressed confidence in the spacecraft, which is being designed to fly NASA astronauts to the space station, and their ability to bring it back safely.

"We have a healthy spacecraft," said NASA Administrator Jim Bridenstine. "The NASA and Boeing teams have been working hand in glove to accomplish as many of the test objectives we can." Jim Chilton, Boeing's senior vice president for space and launch, said the Starliner's status "is really excellent. . . . In space, Starliner has proven to be an able vessel."

Still, they acknowledged that re-entry and landing are significant challenges that require a complicated series of maneuvers for a spacecraft that faced problems almost as soon as it was released by the Atlas V rocket and set to fly freely Friday. Boeing has struggled with the Starliner's parachute system previously when one of its three main parachutes failed to deployed.

"Make no mistake we still have something to prove here on entry tomorrow," Chilton said.

The capsule will hit speeds as high as 25 times the speed of sound as it plummets through the atmosphere, and its heat shield will have to withstand 3,000-degree temperatures that will ignite a fireball around the capsule. Then, a series of parachutes will have to deploy, slowing the spacecraft before airbags soften its landing at the White Sands Missile Range in southern New Mexico.

The parachute failure during an abort engine test was attributed to a pin not being properly secured that was supposed to attach the larger main chute to a smaller drag chute. The pin was beneath a protective sheath, and out of sight, so Boeing officials inspecting the chutes before the test didn't know it was not secure.

Chilton said Saturday that he had high confidence that the rigging system on the spacecraft launched Friday was secure. And Steve Stitch, the deputy director of NASA's commercial crew program, said NASA inspectors independently verified the system. They "could clearly see the parachutes were rigged correctly, and we don't have any concerns about that."

Chilton said Boeing was still investigating what went wrong Friday when the Starliner's engines didn't fire as expected after what appeared to be a flawless on-time launch aboard an Atlas V rocket from Cape Canaveral.

Officials have attributed the failure of the engines to fire to a miscalibrated timing system that made the spacecraft think it was at a different point in the mission than it really was. Because of communications problems, controllers on the ground could not get commands to the spacecraft in time to correct the error, and NASA and Boeing decided that the spacecraft should not attempt to dock with the space station as planned.

While the spacecraft was in the wrong orbit, a series of thrusters fired to try to correct the flight path. That burned fuel, and stressed the system, resulting in some error messages from sensors that monitor the health of the thrusters. Since then, the team has been checking on the propulsion systems, "and so far they're all working," Chilton said. "We think we heated up some sensors by stepping on the gas hard."

Chilton said the software system had gone through extensive testing prior to launch. "We are surprised that a very large body of integrated tests, approved by NASA, didn't surface this," he said.

He said the timing system had been reset and appears to be functioning normally. He said other systems aboard the spacecraft aren't expected to be affected. "So far it doesn't look like a major systemic issue," he said.

He said Boeing and NASA have brought in independent teams to see if there could be any similar problems as it prepares to land. "Over the last 24 hours we've had teams working that very hard, and right now we think we're ready to go," he said.

The spacecraft's life support and navigation and control systems are performing well, and the spacecraft's solar arrays are working better than expected, he said.

Chris Ferguson, a former NASA astronaut who now works for Boeing and plans to fly on Starliner's first crewed flight, wrote in a letter to employees that the company was "approaching the next few days with guarded optimism of a successful recovery."

He added: "To coin a golf analogy, anyone can play in the fairway. . .only true champions can win while playing out of the rough. Said another way, we will be judged not by our mistakes, but rather by the poise under pressure we demonstrate as we recover from them. We can do this."