Body Broker Who Sold Diseased Remains Is Convicted Of Fraud

The case against Arthur Rathburn is part of a growing national investigation by federal authorities into the largely unregulated market for body parts in the United States. Federal agents found a grisly scene when they raided Rathburn's warehouse in 2013, including remains frozen together flesh on flesh. 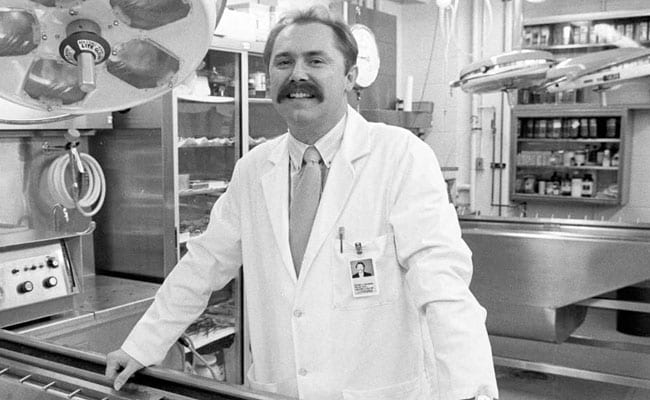 Arthur Rathburn is pictured at the University of Michigan in Ann Arbor, Michigan, U.S. in November 1988.

The case against Arthur Rathburn is part of a growing national investigation by federal authorities into the largely unregulated market for body parts in the United States. Federal agents found a grisly scene when they raided Rathburn's warehouse in 2013, including remains frozen together flesh on flesh.

Current U.S. laws only regulate body parts intended for transplant, such as hearts and livers. The buying and selling of body parts for research and education -- Rathburn's line of business -- is legal under U.S. law. He was charged with defrauding clients by selling them body parts infected with HIV and hepatitis without their knowledge.

Rathburn's ex-wife and business partner, Elizabeth, testified that they bought body parts from companies that encourage people to donate their bodies to science. In an effort to boost profits, she testified, the Rathburns sometimes bought infected bodies and parts, which are sold at discount because few medical entities want them for training or education.

Elizabeth Rathburn pleaded guilty to fraud, and she cooperated with the prosecution. During testimony before the federal jury in Detroit this month, she said that she expects her sentence will be between four and 10 months.

Arthur Rathburn, who did not testify at trial, faces a maximum of 20 years in prison, although the U.S. sentencing guidelines the judge must consider generally call for a shorter term. Both are expected to be sentenced in the spring.

Rathburn was convicted on seven counts of fraud and acquitted of two counts of fraud. His lawyers had contended that the case focussed on contract disputes with his customers over the quality of his products and ought to be brought in civil court, not criminal court.

"There are no industry regulations regarding the business Arthur Rathburn was engaged in," his defence lawyers argued in a court filing. "Industry standards and what constitutes a 'clean' environment are subjective matters, not a matter for criminal prosecution."

Reuters reported last month that authorities found four foetuses, each in its second trimester, during the warehouse raid. It is illegal to sell foetuses. Rathburn was not charged with doing so, and it's unclear how the foetuses were acquired. Officials and defence lawyers have declined to comment on the matter. The discovery of the foetuses, however, may be raised during the sentencing phase.

The government's failure to stop Rathburn sooner, despite a decade of warning signs, was one in a series of stories Reuters published last year about the industry.

As part of the series, a reporter purchased two human heads and a spine from a broker in Tennessee, deals made with just a few emails at a cost of $900, plus shipping.

The series also profiled two Phoenix brokers -- one who earned at least $12 million from the sale or use of donated body parts and one who pleaded guilty to defrauding customers. The latter, Steve Gore, cooperated with the government and testified against Rathburn in the Detroit trial. He told the jury that he "made mistakes" while operating a business that harvested 5,000 bodies in a decade, but said that he had no state or federal regulations to guide him.

A Reuters story in December described how Gore's technicians dismembered bodies with construction saws purchased from Home Depot. Under cross-examination, Gore was asked if he used the construction saw instead of a proper medical instrument because it was cheaper.

(This story has not been edited by NDTV staff and is auto-generated from a syndicated feed.)
Comments
Arthur RathburnFederal agents