Japanese media said all seven of the sailors who had been reported missing were found dead. 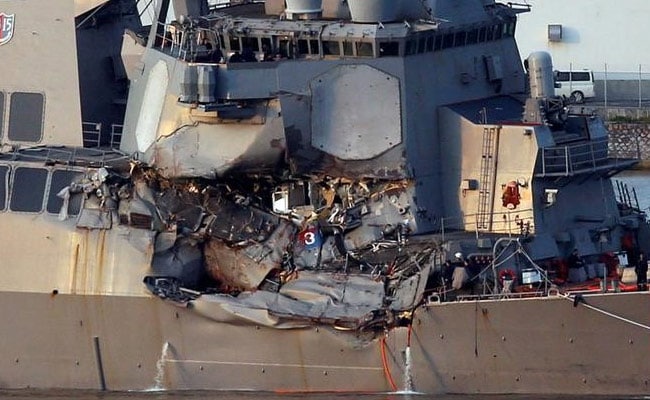 The USS Fitzgerald, damaged by colliding with a Philippine-flagged merchant vessel

Yokosuka, Japan: The bodies of a number of sailors who were missing after the U.S. Navy destroyer USS Fitzgerald collided with a container ship were found in flooded compartments of the damaged ship, the U.S. Seventh Fleet said in a statement on Sunday.

Japanese media said all seven of the sailors who had been reported missing were found dead.

The Seventh Fleet statement said the sailors were being transferred to a U.S. naval hospital where they would be identified.

"The families are being notified and being provided the support they need during this difficult time," it said.

The Fitzgerald, an Aegis guided missile destroyer, collided with the Philippine-flagged merchant vessel more than three times its size some 56 nautical miles southwest of Yokosuka early on Saturday.

Three people were medically evacuated to the U.S. Naval Hospital in Yokosuka after the collision, including the ship's commanding officer, Commander Bryce Benson, who was reported to be in stable condition, the Navy said.

The other two were being treated for lacerations and bruises and others injured were being assessed aboard the ship.

The USS Fitzgerald sailed into port on Saturday evening but search and rescue efforts by U.S. and Japanese aircraft and surface vessels had been continuing for the seven missing sailors, the Navy said.

Benson took command of the Fitzgerald on May 13. He had previously commanded a minesweeper based in Sasebo in western Japan.

It was unclear how the collision happened. "Once an investigation is complete then any legal issues can be addressed," a spokesman for the U.S. 7th Fleet said.

The Fitzgerald suffered damage on her starboard side above and below the waterline, causing "significant damage" and flooding to two berthing spaces and other areas of the ship, the Navy said.

Promoted
Listen to the latest songs, only on JioSaavn.com
(Reporting by Tim Kelly and Linda Sieg; Editing by Paul Tait)
© Thomson Reuters 2017