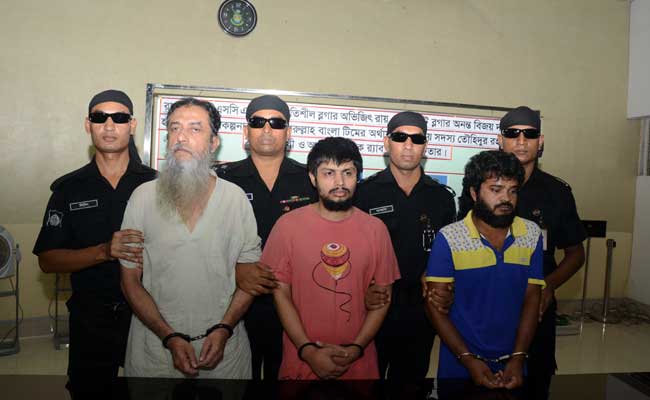 Rapid Action Battalion members with the suspected killers at a press conference in Dhaka.

Kolkata: Three persons have been arrested in Dhaka for the murder of Avijit Roy and Ananta Bijoy Das, the two secular bloggers who were brutally murdered in Bangladesh earlier this year.

All three are members of the banned terror group Ansarullah Bangla Team, which claims links with the Al Qaeda Indian Subcontinent.

Rehman and Sadek have admitted their involvement in planning the death of Roy in February in Dhaka and Das in May in Sylhet, said Major Maksudul Alm, deputy director of the elite Dhaka force, Rapid Action Battalion or RAB. The RAB held a press conference in Dhaka today where the arrested men were produced.

Rehman is believed to be the main financier and current mastermind of Ansarullah Bangla Team whose founder Jasimuddin Rehmani is in jail since 2013 for the murder of another blogger Rajib Haidar in 2012. Rehmani has admitted that he had monitored movements of both bloggers before their murder.

Sadek met Jasimuddin Rehmani in 2007 and was his health advisor till 2012. He is believed to have met Rehmani several times in jail for instructions.

Aminul Moulik was in charge of arranging passports for members of Ansarullah Bangla Team who wanted to flee Bangladesh.

At least four other members of Ansarullah Bangla team involved in the blogger killings are absconding. They are Ramzan aka Siam, Nayim. Julhas Biswas, Zafran al-Hasan. According to Sadek and Rehman, Ramzan and Nayim were directly involved in the killing of Roy and Das.

Ramzan and Nayim planned Roy's killing for days. On 26 February, the two met near the book fair that Roy was visiting and waited a couple of hours before they stabbed him to death at a pre-planned location. This same group also killed Das, according to Rehman and Sadek.