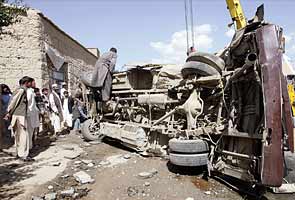 Kabul: At least eight people were killed on Saturday in attacks in southern Afghanistan, including one incident where a suicide bomber on a motorbike blew himself up at a local intelligence office, officials said.

Six people including four Afghan intelligence officers, a coalition service member and a civilian employee working for the coalition died in the suicide attack in the Maruf district of Kandahar province.

Insurgents frequently target Afghan security forces and government officials in an effort to weaken the government.

The Taliban claimed responsibility for the bombing, with spokesman Qari Yousef Ahmadi saying in a text message to reporters that the group was targeting international forces operating in Afghanistan.

Kandahar provincial spokesman Ahmad Jawed Faisal said the blast occurred in the morning at an entry point to the intelligence office. He said three other Afghan intelligence officers were wounded, including two who were in critical condition.

Promoted
Listen to the latest songs, only on JioSaavn.com
Jamie Graybeal, a spokesman for the international coalition, confirmed that one coalition service member and a civilian working with the coalition died in the attack. The wounded were evacuated to coalition medical facilities for treatment, he added.

A second attack killed two Afghan policemen and left three others wounded in Qalat, the capital of neighboring Zabul province, provincial spokesman Shariullah Nasari said. After a police vehicle ran over a roadside mine, he said, a second blast struck police who had rushed to aid their colleagues.
Comments
Bomb blasts