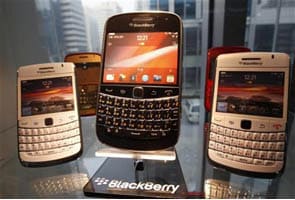 Toronto: Blackberry maker Research In Motion (RIM) Limited is losing two more senior executives as the money-losing company embarks on a strategic overhaul that its new chief executive says could result in its sale.

A stream of executives have left RIM in the past year as its once-dominant market share has slipped amid fierce competition from Apple Inc  and phones running on Google Inc's Android. RIM shares have dropped more than 80 per cent from a peak of almost $70 in February 2011, to $12.67 on Nasdaq on Thursday.

Last week, RIM said it would stop issuing financial forecasts and that it was reviewing strategic options, such as entering partnerships and joint ventures or licensing its software.

Chief Executive Officer (CEO) Thorsten Heins, who took the reins in January when long time co-CEOs Mike Lazaridis and Jim Balsillie resigned under pressure, would not rule out a possible sale of the company.

Several senior executives announced their departures in last week's earnings report - including Balsillie, who stepped down from the board. RIM posted a net loss of $125 million after booking write downs on its legacy BlackBerry 7 phones and goodwill.

RIM last recorded a loss under generally accepted accounting principles (GAAP) in the fiscal 2005 fourth quarter, when it booked tax expenses and paid to resolve a patent infringement case that had threatened to shut down its US operations.

The Waterloo, Ontario-based company is seeking a Chief Marketing Officer and a Chief Operating Officer.

In July RIM slashed 2,000 jobs, or about 11 per cent of its workforce, to cut costs as sales and profit fell. Its developer relations and sales and marketing teams were particularly hard hit.