George Soros dwelt on concerns in the West about Chinese tech giants ZTE and Huawei, as countries roll out next-generation 5G wireless networks. 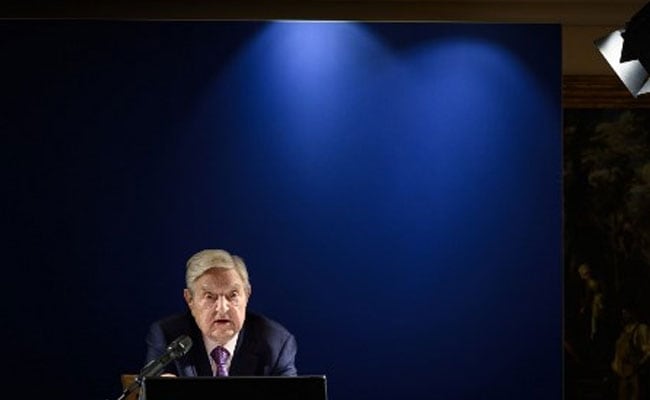 Billionaire investor George Soros on Thursday said Chinese President Xi Jinping was "the most dangerous enemy" of free societies for presiding over a high-tech surveillance regime.

"China is not the only authoritarian regime in the world but it is the wealthiest, strongest and technologically most advanced," he said, noting concerns too about Vladimir Putin's Russia.

"This makes Xi Jinping the most dangerous opponent of open societies," Soros told a dinner audience on the margins of the World Economic Forum in Davos.

The Hungarian-born philanthropist said US tech giants such as Facebook must be reined in by authorities for the good of democracy.

He pointed "to the mortal danger facing open societies from the instruments of control that machine learning and artificial intelligence can put in the hands of repressive regimes".

Soros dwelt on concerns in the West about Chinese tech giants ZTE and Huawei, as countries roll out next-generation 5G wireless networks.

He said US President Donald Trump should crack down hard on the companies as part of a more focussed effort on China instead of taking on "practically the whole world" in trade conflicts.

"If these companies came to dominate the 5G market, they would present an unacceptable security risk for the rest of the world," Soros said in a speech, copies of which were distributed in Chinese.

Communist China under Xi has been building a cutting-edge system including facial recognition to keep tabs on its citizens, and Soros said algorithms would calculate how dangerous a threat individuals might pose to the regime.

"The 'social credit' system, if it became operational, would give Xi total control over the people," he said at the dinner, which was open to media.

"Since Xi is the most dangerous enemy of the open society, we must pin our hopes on the Chinese people, and especially on the business community and a political elite willing to uphold the Confucian tradition," he said, referencing the ancient history of Chinese officials speaking truth to power, on pain of imprisonment or death.

"This doesn't mean that those of us who believe in the open society should remain passive," Soros added.

"The reality is that we are in a Cold War that threatens to turn into a hot one.

"On the other hand, if Xi and Trump were no longer in power, an opportunity would present itself to develop greater cooperation between the two cyber-superpowers."

Soros's dinner speeches are an annual tradition at the elite business forum in Davos, and this year it came after a particularly difficult period for his Open Society Foundations.

Last month, the Soros-funded Central European University said it had been "forced" to move its most prestigious study programmes to Vienna after a bitter legal battle with the right-wing government of Prime Minister Viktor Orban in his native Hungary.

Soros did not touch on the issue in his Davos speech, but did say: "Those of us who want to preserve the open society must work together and form an effective alliance. We have a task that can't be left to governments."

(This story has not been edited by NDTV staff and is auto-generated from a syndicated feed.)
Comments
George SorosXi JinpingGeorge Soros On China