Bill Gates Reveals He Once Drank Water From 'Faecal Sludge', For A Good Cause

Mr Gates admitted he's done some ''weird cr*p' in his life'' - from drinking 'water from faecal sludge' to ''sharing a stage with human faeces. '' 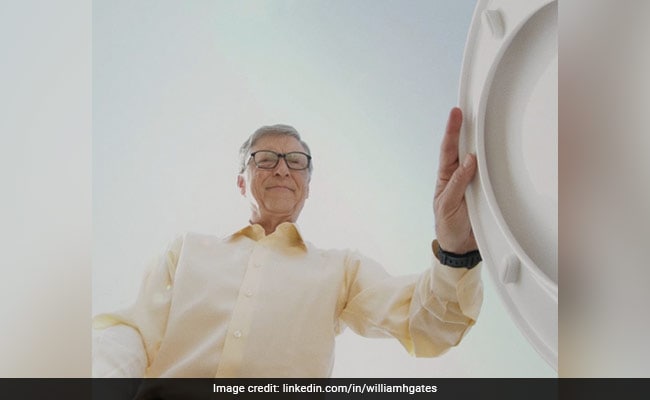 American billionaire and philanthropist Bill Gates recently reflected on some of the strange things he has done in his life, in a LinkedIn post. The 67-year-old billionaire took to the professional networking site, to mark a post about World Toilet Day which was observed on November 19. Mr Gates admitted he's done some ''weird cr*p' in his life'' - from drinking 'water from faecal sludge' to ''sharing a stage with human faeces. ''

The Microsoft co-founder wrote: "I've done some weird crap over the years: I drank water from fecal sludge with Jimmy Fallon, shared the stage with a jar of human feces, and smelled pit latrine odor." However, all these acts were actually for a noble cause, as the post further reveals.

"These antics got a few laughs, but my goal has always been to get people to care about an issue that impacts 3.6 billion people: poor sanitation," the philanthropist added. "Thanks to scientists and engineers from around the world, we're getting closer to new solutions that will prevent disease and illness."

The post also links to a blog post from July 2021, which talks about new sanitation solutions in wake of the rising population. In the blog post, he explained how, 10 years ago, the Bill and Melinda Gates Foundation had "challenged the world to reinvent the toilet".

In order to raise awareness, Mr Gates had taken part in a variety of public stunts, like drinking water from "fecal sludge" in 2015. He had even convinced TV host Jimmy Fallon to do the same, in a bid to promote the Omniprocessor, a machine that turns faeces into water and electricity.

"I watched the piles of faeces go up the conveyer belt and drop into a large bin. They made their way through the machine, getting boiled and treated," Gates said at the time. A few minutes later I took a long taste of the end result: a glass of delicious drinking water, '' a post by GatesNotes reads.

A year, later in 2016, he posted a picture of himself taking a giant whiff of pit latrine odour. He said "the stench was foul and made me wince," and described the smell as "a combination of sewage stink, barnyard sweat, and bitter ammonia topped off with vomit (or was it parmesan cheese?)."

The philanthropist is committed to solving a variety of global issues through his and his ex-wife's charity The Bill and Melinda Gates foundation.