The billionaire philanthropist Bill Gates says the United States and the rest of the world lack a sense of urgency to counter biological threats. 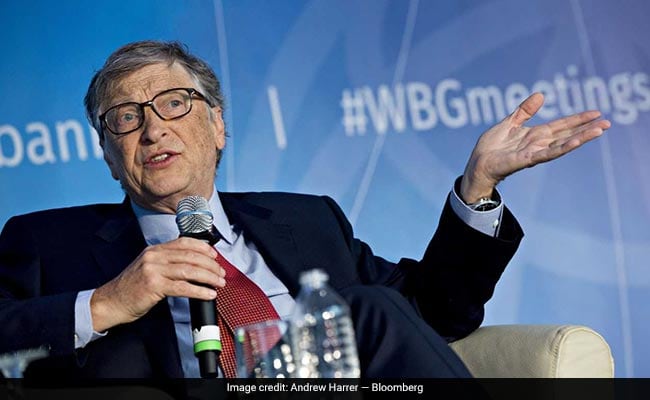 Bill Gates said he laid out the increasing risk of a bioterrorism attack.

Bill Gates says the White House and Congress have failed to lead the nation and the world in preparing for the "significant probability of a large and lethal modern-day pandemic occurring in our lifetimes."

In an interview this week, the billionaire philanthropist said he has raised the issue of pandemic preparedness in three meetings with President Donald Trump since the 2016 presidential election. At each meeting, Gates said he laid out the increasing risk of a bioterrorism attack and stressed the importance of U.S. funding for advanced research on new therapeutics, including a universal flu vaccine, which would protect against all or most strains of influenza.

Gates, who co-founded Microsoft and now leads a foundation on global health, said he told Trump that the president has a chance to lead on the issue of global health security. Trump encouraged him to follow up with top officials at the Health and Human Services Department, the National Institutes of Health and the Food and Drug Administration, Gates said.


Gates said he met several times with H.R. McMaster, the president's former national security adviser, and hopes to meet with McMaster's replacement, John Bolton. The National Security Council, Gates said, is an appropriate office to "show leadership on this issue and decide how to coordinate the various groups" within the government.

"But, you know, I think we've got to push this ... with the executive branch and Congress quite a bit," Gates said. "There hasn't been a big effort along these lines."

His interview with The Washington Post prefaced a speech - on the challenges associated with modern epidemics - that Gates gave Friday before the Massachusetts Medical Society.

Gates and his wife, Melinda, have repeatedly warned that a pandemic is the greatest immediate threat to humanity. Experts say the risk is high because new pathogens are constantly emerging and the world is so interconnected.

Many experts agree that the United States remains underprepared for a pandemic or a bioterrorism threat. The government's sprawling bureaucracy, they say, is not nimble enough to deal with mutations that suddenly turn an influenza virus into a particularly virulent strain, as the 1918 influenza did in killing an estimated 50 million to 100 million people worldwide.

Even this winter's harsh-seasonal flu was enough to overwhelm some hospitals, forcing them to pitch tents outside emergency rooms to cope with the crush of patients.

If a highly contagious and lethal airborne pathogen like the 1918 influenza were to take place today, nearly 33 million people worldwide would die in just six months, Gates noted in his prepared remarks, citing a simulation done by the Institute for Disease Modeling, a research organization in Bellevue, Washington.

In those remarks, Gates highlighted scientific and technical advances in the development of better vaccines, drugs and diagnostics that he said could revolutionize how we prepare for and treat infectious diseases moving forward. He praised last year's formation of a new global coalition, known as CEPI, to create new vaccines for emerging infectious diseases. He also announced a $12 million Grand Challenge in partnership with the family of Google co-founder Larry Page to accelerate the development of a universal flu vaccine.

But vaccines, he noted, take time to research, deploy and generate protective immunity.

"So we need to invest in other approaches, like antiviral drugs and antibody therapies that can be stockpiled or rapidly manufactured to stop the spread of pandemic diseases or treat people who have been exposed," he said in his speech.

Among the advances in these areas are a new influenza antiviral recently approved in Japan that Gates said "stops the virus in its tracks" by inhibiting an enzyme it needs to multiply; research on antibodies that could protect against a pandemic strain of a virus; and a diagnostic test that harnesses the powerful genetic-engineering technology known as CRISPR and has the field-use potential to check a patient's blood, saliva or urine for evidence of multiple pathogens. That test could, for example, identify if someone is infected with Zika or dengue virus, which have similar symptoms.

But even the best tools in the world won't be sufficient, Gates said, if the United States doesn't have a strategy to harness and coordinate resources at home and help to lead an effective global preparedness and response system.

Trump and senior administration officials have affirmed the importance of controlling infectious disease outbreaks. But the Centers for Disease Control and Prevention is facing a loss of emergency funding provided in the wake of the 2014 Ebola epidemic and has begun to dramatically downsize its epidemic-prevention activities in 39 out of 49 countries where disease risks are greatest.

Congress provided some additional funding in last month's spending bill. But it also directed the administration to come up with a comprehensive plan to strengthen global health security at home and abroad.

"This could be an important first step if the White House and Congress use the opportunity to articulate and embrace a leadership role for the U.S.," Gates said in the speech.

Promoted
Listen to the latest songs, only on JioSaavn.com
No other country, he noted, has the depth of scientific or technical expertise that the United States possesses, drawing on the resources of institutions such as NIH, CDC and the Biomedical Advanced Research and Development Authority, as well as the Defense Department's Defense Advanced Research Projects Agency.