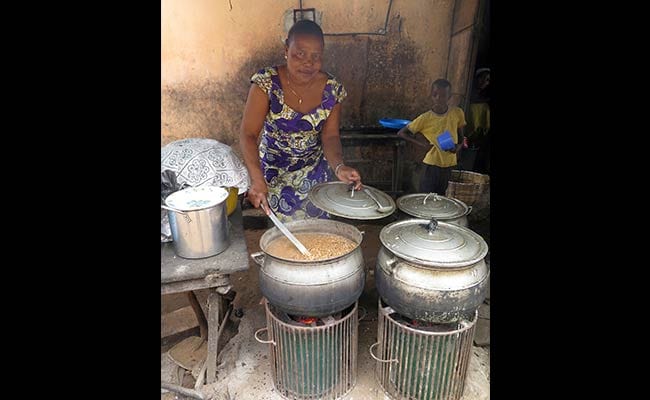 Philomene Ahouansou cooks beans and rice by the roadside using a solar-powered cooker in Porto-Novo on October 1, 2015. (AFP)

Porto-Novo, Benin: Philomene Ahouansou cooks beans and rice in three giant steel pots by the roadside in Benin's capital, Porto-Novo. It's a scene that's common throughout the country.

But instead of a wood-fuelled stove, she's using a solar-powered cooker run on coconut husks, which it's hoped will prevent deforestation and reduce greenhouse gas-producing smoke.

The device called "Mivo", which means "Take it easy" in the local Fon language has been marketed by a charity called Autre Vie.

For the last three years, the organisation has been trying to turn Beninese away from their reliance on charcoal or wood, which is used in four out of five households for cooking.

"When I heard the advert on the radio, I went straight to the Autre Vie offices to buy three," said Philomene.

"There's no smoke getting in your eyes, it's not too hot, you don't have to ventilate it so the fire takes hold. You can work with it all day," she added.

'We leave the trees in peace'

The cooker a metal cylinder with a ceramic bowl on top for the fuel works on the convection principle.

A fan made from recovered computer parts is fixed on one side to a power cable and plugged into a solar panel with a rechargeable battery.

The light from the sun powers the fan, sending a constant stream of hot air to allow cooking.

LED lightbulbs can be attached to the solar panels to give light to customers without electricity, allowing them to stop using dangerous and noxious oil lamps.

Most people, like Philomene, cite financial reasons for buying the cooker but they also now know it's more environmentally friendly.

"We leave the trees in peace in the forest. That gives us rain and when it rains things grow. So, it protects us," she said.

With every purchase, Autre Vie tells customers about climate change.

"We cut down trees illegally for charcoal," said young mother Chimene Agossou, who lives in a household of 13 that switched to cooking with sunshine and coconuts two years ago.

"When we extract the coconut oil we're left with the husks. That's not killing the forests."

Romuald Djivoessoun made his first prototype of the cooker 10 years ago after seeing blacksmiths burn coconut shells in the forge to melt iron.

He honed the design over the years with the help of craftsmen and academics.

"This cooker is going to reduce deforestation and as a result greenhouse gases," said the talkative engineer who runs Autre Vie.

"For a family of four, a bag of shells lasts six months. With charcoal you need a bag and a half every month. You have to cut wood."

Forests cover only 17 percent of Benin yet some 70,000 hectares (173,000 acres) of forests are disappearing every year, according to Benin's forest and natural resources directorate.

Charcoal production is blamed for part of it.

One study estimated that between 2009 and 2010, charcoal production doubled.

Autre Vie managed to convince 200 female charcoal burners to find and adapt coconut husks for use in the solar cookers.

With financial support from the UN development fund some 800 cookers have now been sold, despite being costly for low-income Benin at 55,000 CFA francs.

Djivoessoun said demand is high, with 120 clients on the waiting list, and local craftsmen can't keep up.

The Akpro-Misserete council, near Porto-Novo, donated land to build a small factory to enable more industrial-scale production, which should lower prices and also allow different sizes of cookers to be made.

World leaders are set to gather in Paris in early December for an environmental summit on climate change but Djivoessoun is not happy.

"Small initiatives are not being encouraged. It costs nothing to finance but the impacts are enormous," he said.

Heads of state should look to schemes such as his to make a bigger impact, he added.