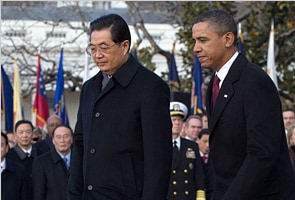 Washington: Declaring that China and the United States have ''an enormous stake in each other's success,'' President Obama welcomed President Hu Jintao of China to the White House on Wednesday with an elaborate color-guard ceremony that included a colonial fife and drum band and a 21-gun salute.

The formal White House arrival ceremony - the 21-gun salute is reserved solely for visiting heads of state -- was a display of pomp and circumstance that stood in stark contrast with the tough rhetoric the Obama administration is employing in its relationship with China on issues from trade to currency and human rights.

And indeed, Mr. Obama did not entirely abandon that rhetoric Wednesday morning. After promoting the virtues of Chinese and American cooperation, the president - the 2009 winner of the Nobel Peace Prize - used the ceremony to deliver a gentle reminder to China, which is holding the 2010 winner of the prize, Liu Xiaobo, as a political prisoner.

"We also know this,'' the president said: "History shows that societies are more harmonious, nations are more successful and the world is more just when the rights and responsibilities of all nations and all people are upheld, including the universal rights of every human being.'' (Full Text: Obama's speech in Hu Jintao's honour)

Mr. Hu, speaking through a translator, used his remarks to call for the United States and China to "adopt a long-term perspective, seek common ground while reserving differences and work together to achieve sustained, sound and steady development of our relations." (Full Text: Hu Jintao's speech at the White House)

With Mr. Hu by his side, Mr. Obama stood, his posture erect and his gaze fixed forward, as the guns began to fire, while a military band played the national anthem of the People's Republic of China. Then, as the music shifted into the familiar strains of the Star Spangled Banner, the president slowly raised his right hand and put it across his chest, underneath a tiny flag pin on the lapel of his coat.

The crowd was much thinner for Mr. Hu than it has been for arrival ceremonies past. When Pope Benedict XVI and the Queen of England visited Washington to meet with Mr. Obama's predecessor, George W. Bush, thousands packed the South Lawn, elbowing their way past one another to take cell phone pictures.

On Wednesday, As Mr. Obama escorted Mr. Hu around the South Lawn for the customary reviewing of troops, they stopped to shake the hands of a small crowd of schoolchildren - including Mr. Obama's 9-year-old daughter, Sasha - who waving tiny American and Chinese flags.

The two presidents will have  a busy day that will include private meetings, a session with Chinese and American business executives, a news conference, a formal lunch at the State Department, as well as a state dinner in Mr. Hu's honor. On Thursday, the Chinese president will travel to Capitol Hill to meet Congressional leaders, and then travel to Chicago.

The last time Mr. Hu came to Washington, in 2006, when Mr. Bush was president, his arrival ceremony was marred by a protester from the Falun Gong spiritual sect, who had infiltrated the event using press credentials - an embarrassment to the Bush administration.

Wednesday's ceremony went off without any diplomatic hitches, but there was a tense moment in the crowd when Deborah Mullen, the wife of Admiral Mike Mullen, chairman of the joint chiefs of staff, fainted and fell to the ground during the ceremony. She was escorted out by Bill Daley, the White House chief of staff, and was attended to by White House medics.

Mr. Obama began his remarks Wednesday by harking back to the visit of another Chinese president, Deng Xiaoping, in the winter of 1979, when  Jimmy Carter was in the White House, and the two countries engaged in what Mr. Obama called ''the historic normalization'' of relations.

"The 30 years since has been a time of growing exchanges and understanding,'' the president said. "With this visit, we can lay the foundation for the next 30 years.''
Comments
US PresidentBarack ObamaObama Hu JintaoChina PresidentChina US relationsChina and US