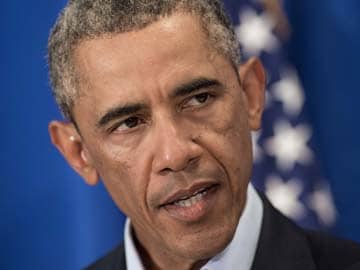 Washington, United States: President Barack Obama said in an interview aired Sunday the US military would help in the fight against fast-spreading Ebola in Africa, but said it would be months before the epidemic slows.

Obama said that, in its current form, he did not believe Ebola would reach the United States, but warned the virus could mutate and become a much greater threat to those outside Africa.

The president argued that the deadly toll of the disease was being exacerbated because of the rudimentary public health infrastructure in Africa.

"We're going to have to get US military assets just to set up, for example, isolation units and equipment there, to provide security for public health workers surging from around the world," Obama said on NBC's "Meet the Press."

"If we do that, then it's still going to be months before this problem is controllable in Africa," he said.

But he added, "if we don't make that effort now, and this spreads not just through Africa but other parts of the world, there's the prospect then that the virus mutates.

"It becomes more easily transmittable. And then it could be a serious danger to the United States."

Promoted
Listen to the latest songs, only on JioSaavn.com
The death toll from the Ebola epidemic -- which is spreading across West Africa, with Liberia, Guinea, Sierra Leone the worst hit -- has topped 2,000, of nearly 4,000 people who have been infected, according to the World Health Organization.